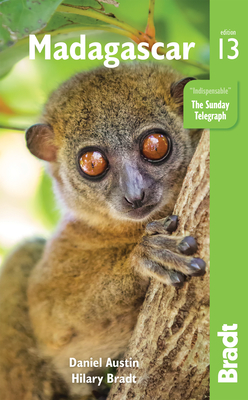 
This title is likely unavailable. Email or call for price and availability.
A new, thoroughly updated 13th edition of Bradt's Madagascar, the leading and most comprehensive guide to this unique island nation, written by Hilary Bradt, who first visited in 1976 and has returned roughly 35 times, and Daniel Austin, who has visited more than 15 times and continues to travel there annually. Bradt's Madagascar is by far the most thorough guide to the country in English and includes contributions from over 50 experts in a book which has been the most authoritative guide to the country for three decades. It covers national parks and protected areas and includes itineraries to suit all interests and budgets, plus details of around 1,000 hotels and restaurants.Madagascar is fascinating not only zoologically and botanically, but culturally, linguistically, historically and geologically. This vast island is the fourth largest in the world and also the oldest, which partly explains why it has evolved into an incredible hotspot for biodiversity, with a truly unique flora and fauna that is more than 80% endemic to the island, and with new species being described virtually on a daily basis. Madagascar is also the only place where you can see wild lemurs. Almost a quarter of the world's 450-or-so primates exist only here. And Madagascar is the world's largest grower of vanilla orchids, the bulk of which is supplied to the USA for flavouring ice cream and Coca Cola.With Bradt's Madagascar you can visit tropical rainforest and seek out its incredible flora and fauna; explore otherworldly limestone spires, most famously at Tsingy de Bemaraha National Park - Madagascar's most striking landscape; discover the beach-fringed islands around Nosy Be, fabulous for scuba diving, snorkelling, kayaking, whale-watching and fishing; and make the most of a host of adventuring and sporting possibilities, including surfing, windsurfing, rock climbing, tree climbing, caving, river trips, mountain biking and hiking. Also covered are the UNESCO World Heritage Site of Ambohimanga; the renowned Avenue des Baobabs, one of the country's most photographed scenes, and information on the best birdwatching spots: Madagascar has almost 300 avian species, with a high proportion of endemics, including five whole endemic families.
Daniel Austin's fascination with Madagascar began long before he managed to muster the funds to go and see the island first-hand, on what he planned to be a once-in-a-lifetime trip before submitting to the inevitability of getting a 'proper job'. Whether it was his aversion to such drudgery or the allure of Madagascar that was stronger than he expected isn't certain - perhaps both - but the trip changed the course of his life and he has returned at least once every year ever since, often for three months at a time. Now occupied full time with all things Malagasy, he leads small-group tours to the island (www.danielaustin.co.uk), gives occasional lectures on Madagascar, is secretary of the London-based Anglo-Malagasy Society, founded the Madagascar Library (www.madagascar-library.com) and co-authored the other Bradt titles Madagascar Wildlife and Madagascar Highlights. www.danielaustin.co.ukHilary Bradt's career as an occupational therapist ended when potential employers noticed that the time taken off for travel exceeded the periods of employment. With her former husband George, she self-published her first guidebook in 1974 during an extended journey through South America. As well as running Bradt Travel Guides, Hilary worked for 25 years as a tour leader in Madagascar. Her in-depth knowledge of the country has brought her lecture engagements at the Royal Geographical Society, the Smithsonian Institution and on board expedition cruise ships, as well as numerous commissions for travel articles. She received an MBE in 2008 for services to the travel industry, a Lifetime Achievement Award from the British Guild of Travel Writers in 2009, and a Travel Media Special Contribution award in 2019. She now lives in semi-retirement in Devon and is delighted to have handed over the hard graft of researching new editions to Daniel. www.hilarybradt.com