Call to Arms: Iran's Marxist Revolutionaries: Formation and Evolution of the Fada'is, 1964–1976 (Radical Histories of the Middle East) (Hardcover) 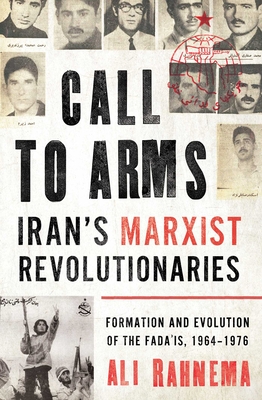 Call to Arms: Iran's Marxist Revolutionaries: Formation and Evolution of the Fada'is, 1964–1976 (Radical Histories of the Middle East) (Hardcover)

In Call to Arms, Ali Rahnema provides a comprehensive history of the Fada’is, beginning by asking why so many of Iran’s best and brightest chose revolutionary Marxism in the face of absolutist rule. He traces how radicalised university students from different ideological backgrounds morphed into the Marxist Fada’is in 1971, and sheds light on their theory, practice and evolution. While the Fada’is failed to directly bring about the fall of the Shah, Rahnema shows they had a lasting impact on society and they ultimately saw their objective achieved.
Ali Rahnema is Professor of Economics at the American University of Paris. He is the author of An Islamic Utopian: A Political Biography of Ali Shari‘ati, Behind the 1953 Coup in Iran and Superstition as Ideology in Iranian Politics.
‘Ali Rahnema has produced the most comprehensive and deeply engaging narrative to date of the revolutionary left in Iran during the 1970s… A masterwork, a must-read!’
— Behrooz Ghamari-Tabrizi, Professor of Near Eastern Studies, Princeton University

‘Meticulous and riveting, this book works like a time-tunnel, taking us back to experience “first-hand” the dramatic heroics and painful tragedy of radical political opposition in 1960s–1970s Iran.’
— Afshin Matin-Asgari, author of Both Eastern and Western: An Intellectual History of Iranian Modernit

‘Delivers like a ray of hope… This book is an act of redemption, not just of the Iranian Marxist revolutionaries but of the spirit of the age that demanded armed uprising against tyranny.’
— Hamid Dabashi, Hagop Kevorkian Professor of Iranian Studies and Comparative Literature, Columbia University

‘Call to Arms is a significant study of Iran’s militant left in the 1960s and 1970s. By exploring a broad range of primary and secondary source material it closely examines the formation and operational dynamics of Iran’s radical opposition during the Cold War.’
— Ali Gheissari, Professor of History, University of San Diego

‘Rahnema has done the staggeringly difficult task of offering us a meticulously researched history of the life and times of the Fada?is in late-Pahlavi Iran.’
— Roham Alvandi, Associate Professor of International History, London School of Economics and Political Science