Conditioned Reflex Therapy: How to be Assertive, Happy and Authentic, and Overcome Anxiety and Depression (Paperback) 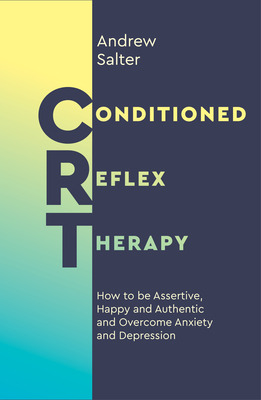 Conditioned Reflex Therapy: How to be Assertive, Happy and Authentic, and Overcome Anxiety and Depression (Paperback)

Welcomed as a revolutionary and effective approach to improve people’s mental health and help them find happiness when it was first published in 1949, Andrew Salter's Conditioned Reflex Therapy introduced both the fundamental ideas of behavior therapy and many techniques still practised today.

This classic guide, which is perhaps the first self-help book, includes specific methods for assertion, getting in touch with your feelings, relaxation, and using imagery to overcome phobias, anxieties, and depression. Captivating  and direct, it still seems fresh, though it also conveys the spirit of New York City in the late 1940’s. It vividly evokes the timeless concerns of people striving for happiness and self-actualization amid the energy of post-war America, the hum of traffic, the buzz of restaurants and cocktail parties. It will teach you how to be more aware of your feelings and more authentic in your life, and thereby to be happier and more fulfilled in your relationships and career.
Andrew Salter (May 9, 1914 - October 6, 1996) introduced conditioned reflex therapy, the first systematic approach to behavior therapy , in 1949. It emphasized assertive and expressive behavior as the way to combat inhibitory behavioral and self-defeating cognitive patterns which Salter argued were the underlying causes of most neuroses. In the early 1940's, Salter developed a model of hypnosis and hypnotherapy based on conditioning which has since become broadly accepted.
"I have read [Salter’s work] with admiration and approval." - H.G. Wells (1943)


"CRT remains decades ahead of the field. A half a century later, it is still an
extraordinarily effective classic. The vision of Andrew Salter lives on." - Pat de Leon, PhD; Former President, American Psychological Association; former Chief of Staff, Senator Daniel Inouye (2002)


"… [L]ively, literate, and sometimes puckishly provocative prose …. [A] vision and a
set of techniques that have become … widely accepted and applied … effective for a
wide variety of disorders…. Salter’s ongoing influence extends beyond behavior
therapy and psychology generally." - Gerald Davison, PhD; Professor and Chair, Department of Psychology, University of Southern California; Past-President, Association for the
Advancement of Behavior Therapy (2002)


"… energy and boldness. …. direct, wise without being complex, and ready to take on
the world…. [I]t lit the match that became behavior therapy …. Salter’s genius is his
intuitive grasp of what moves human beings and his willingness to charge straight
in that direction …. of more than historical interest … especially for beginning
behavioral and cognitive therapists. " - Steven C. Hayes, PhD; Foundation Professor of Psychology, University of Nevada, Reno; Developer of Acceptance and Commitment Therapy and Relational Frame Theory (2018)


"Much of the science and wisdom on which modern day, powerful … interventions
are based comes from this book…. fascinating case studies described in lucid and
vigorous prose … this timeless classic should be read by every therapist and most of
their patients." - David H. Barlow Ph.D, ABPP; Professor of Psychology and Psychiatry
Emeritus; Founder, Center for Anxiety and Related Disorders at Boston University; Past-President, AABT