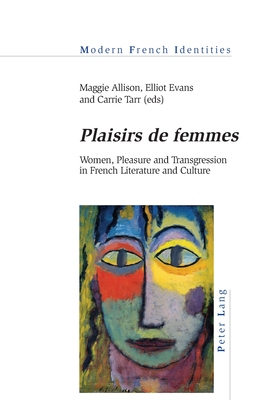 This is book number 133 in the Modern French Identities series.

Feminist approaches to questions of women, pleasure and transgression have generally been premised on the assumption that women's pleasures are typically constrained - if not ignored, marginalized or forbidden - in patriarchal cultures. The naming, foregrounding and pursuit of women's pleasures can therefore be deemed potentially transgressive and linked to women's emancipation in other realms. The essays in this volume draw on a range of materials, from travel writing and the novel to film and stand-up comedy, addressing the specificity of French and Francophone approaches to women, pleasure and transgression across a range of historical contexts.

The volume is divided into three sections: intellectual and creative pleasures; normative pleasures, that is, pleasures conforming to women's conventionally expected roles and status as well as to accepted views regarding race, national identity and sexuality; and perverse pleasures, that is, pleasures transgressive in their tendency to reject authority and norms, and often controversial in their excessive appetite for violence, sex, alcohol or food. In each case, questions are raised about how we approach such pleasures as feminist researchers, motivated in part by a desire to counter the notion of feminism and feminist research as something dour or joyless.