The Poet and the Publisher: The Case of Alexander Pope, Esq., of Twickenham versus Edmund Curll, Bookseller in Grub Street (Hardcover) 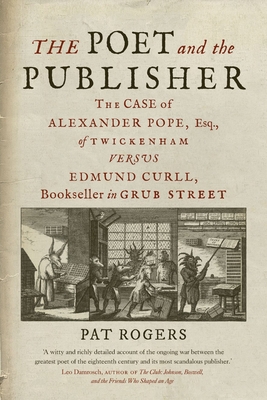 The Poet and the Publisher: The Case of Alexander Pope, Esq., of Twickenham versus Edmund Curll, Bookseller in Grub Street (Hardcover)


This title is likely unavailable. Email or call for price and availability.
“Drawing on deep familiarity with the period and its personalities, Rogers has given us a witty and richly detailed account of the ongoing war between the greatest poet of the eighteenth century and its most scandalous publisher.”—Leo Damrosch, author of The Club: Johnson, Boswell, and the Friends Who Shaped an Age

“What sets Rogers’s history apart is his ability to combine fastidious research with lucid, unpretentious prose. History buffs and literary-minded readers alike are in for a punchy, drama-filled treat.”—Publishers Weekly

The quarrel between the poet Alexander Pope and the publisher Edmund Curll has long been a notorious episode in the history of the book, when two remarkable figures with a gift for comedy and an immoderate dislike of each other clashed publicly and without restraint. However, it has never, until now, been chronicled in full. Ripe with the sights and smells of Hanoverian London, The Poet and Publisher details their vitriolic exchanges, drawing on previously unearthed pamphlets, newspaper articles, and advertisements, court and government records, and personal letters. The story of their battles in and out of print includes a poisoning, the pillory, numerous instances of fraud, and a landmark case in the history of copyright. The book is a forensic account of events both momentous and farcical, and it is indecently entertaining.
Pat Rogers is distinguished professor emeritus in the liberal arts at the University of South Florida and an acknowledged authority on Pope. A prolific author and editor, his books include Edmund Curll, Bookseller; A Political Biography of Alexander Pope; and the Oxford World’s Classics editions of Pope’s work.
"Rogers’s lively new history, The Poet and the Publisher, presents Pope and Curll’s clashes as a long-running courtroom drama, or 'Pope v. Curll' . . . [giving] us a modern sense of a figure usually portrayed as ultra-traditional, revealing him instead as a writer whose concerns about self-image and the power of presentation might be thought close to our own."
— Clare Bucknell

"Rapid technological advance, a dark underworld of uncensored publishing, a threatened rupture with Scotland, even fears of a new outbreak of plague. Close scrutiny of the first few decades of the eighteenth century reveals some startling (and oddly reassuring) parallels with our own trying times. In his new book, Rogers, an expert on the writings of Alexander Pope and much else, resurrects what you might think was an obscure battle over copyright between Pope and the Grub Street bookseller and printer Edmund Curll. Their quarrel, though, becomes a prism through which Rogers captures the upheavals, hubbub, and stench, but, above all, the wit of that period, when words could have the explosive impact of hand grenades. . . . His book serves as a monument to them both, a literary delicacy in the spirit of Pope, dashed with more than a little of Curll’s sauce."
— Spectator

"Rogers’s knowledge of Pope, Curll, and their Grub Street world is, literally, encyclopedic. He wrote the Alexander Pope Encyclopedia and several other important, deeply learned books about Pope and his contemporaries. Rogers maneuvers skillfully through the Grub Street network of authors, fake authors, and printers-fronting-for-booksellers-fronting-for-conspirators-fronting-for-political leaders."
— Times Literary Supplement

"In the course of an extraordinarily productive career spanning six decades, Rogers has written cogently, perceptively, and memorably about all kinds of literature, as well as about the character and capacities of literary criticism. His powers of scrutiny and summary are often arresting and always dedicated to resisting imprecision. In his latest book, Rogers imparts a fresh, first-hand excitement to historical events with which he has long been not only familiar but intimate. He knows more than anyone about Alexander Pope and Edmund Curll."
— Literary Review

"Antipathy between the artist and the money-men is nothing new. As Pat Rogers details in his fascinating and revelatory book, the satirist and poet Alexander Pope spent a considerable part of his life—from around 1716 until his death in 1744—fighting the bookseller and proto-publisher Edmund Curll over the issue of copyright. . . . Rogers is a scrupulously fair-minded biographer. He structures The Poet and the Publisher as a quasi-courtroom drama, marshaling the often bizarre and inexplicable anecdotes and events with clarity and wit. . . . [A] tightly written tale with great learning worn pleasantly lightly."
— Critic

"Rogers dives deep into eighteenth-century English poet, satirist, and translator Alexander Pope and his fraught relationship with the bookseller and publisher Edmund Curll, in this entertaining history. . . . Rogers’s account is chock-full of original literary and historical research, and is impressive in its scope. . . . What sets Rogers’s history apart is his ability to combine fastidious research with lucid, unpretentious prose. History buffs and literary-minded readers alike are in for a punchy, drama-filled treat."
— Publishers Weekly

"Lively and extremely informative, this book is written so that nonspecialists can enjoy it as well as profit from it. . . . Recommended."
— Choice

"A fascinating account of one of literary London’s most famous feuds. . . . Both the triggers for the conflict and the course the quarrel takes offer deep insights into the world of letters in Hanoverian England. . . . From a legal point of view as well, there is much in the book which is gripping. The narration refers to the laws of copyright, obscenity, seditious libel, blasphemous libel, fraud, etc., with all of which Curll had more than a passing familiarity. . . . The book is a cracking good read, and Reaktion Books deserves credit for publishing it."
— Commonwealth Lawyer

"Drawing on deep familiarity with the period and its personalities, Rogers has given us a witty and richly detailed account of the ongoing war between the greatest poet of the eighteenth century and its most scandalous publisher. Cleverly presented as the trial of Pope v. Curll, with scores of documents as 'exhibits' and with posterity as jury, the narrative fully justifies the author’s comment that 'Pope and Curll are both inherently funny.'"
— Leo Damrosch, author "The Club: Johnson, Boswell, and the Friends Who Shaped an Age"

"Everybody who has struggled to establish the facts, let alone the truth, in the fiendishly complicated maneuvers in the feud between Pope and Curll owes Rogers a debt of gratitude. His detective work is exhilarating. Decades of research into this 'improbable relationship' give him an authority beyond all others. Rogers lays out the case for and against as if in a court of law and the reader must decide. Was Curll a villain? Was Pope a double dealer? Were they well-matched ‘kissing cousins?’ Together the pair turned literature into news, using books as weapons in a war of words that has echoed down the ages. Rogers brings clarity, scholarship, and insight to the muddiest of stories and tells it with a verve and wit that even the combatants would surely admire."
— Norma Clarke, Professor Emeritus, Kingston University, and author of “Queen of the Wits: A Life of Laetitia Pilkington”

"Pope versus Curll––a thirty-year war of words (and much else) between the cleverest satirist and the sleaziest publisher of the eighteenth century––was among the most vitriolic feuds in literary history. In this definitive, richly documented account, Rogers tells the story with his trademark blend of scholarly heft and analytic flair. Each chapter sheds new light on the ferocious yet oddly symbiotic relationship between the two antagonists, and on the larger implications––cultural,  political, religious, social––of their endlessly surprising duel."
— Thomas Keymer, Chancellor Jackman Professor, University of Toronto, and editor of “The Oxford History of the Novel in English, Vol. 1”