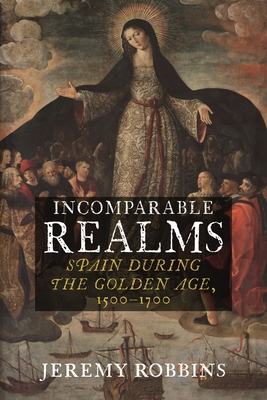 
Available in Warehouse. Wait for Email Confirmation for ETA
A sumptuous history of Golden Age Spain that explores the irresistible tension between heavenly and earthly realms.

Incomparable Realms offers a vision of Spanish culture and society during the so-called Golden Age, the period from 1500 to 1700 when Spain unexpectedly rose to become the dominant European power. But in what ways was this a Golden Age, and for whom? The relationship between the Habsburg monarchy and the Roman Catholic Church shaped the period, with both constructing narratives to bind Spanish society together. Incomparable Realms unpicks the impact of these two historical forces on thought and culture and examines the people and perspectives such powerful projections sought to eradicate.

The book shows that the tension between the heavenly and earthly realms, and in particular the struggle between the spiritual and the corporeal, defines Golden Age culture. In art and literature, mystical theology and moral polemic, ideology, doctrine, and everyday life, the problematic pull of the body and the material world is the unacknowledged force behind early modern Spain. Life is a dream, as the title of Calderón’s famous play of the period proclaimed, but there is always a body dreaming it.
Jeremy Robbins is the Forbes Professor of Hispanic Studies at the University of Edinburgh. His books include Arts of Perception: The Epistemological Mentality of the Spanish Baroque, 1580–1720.
"A brilliant account of the Spanish monarchy in its 'Golden Age,' when it was the foremost power in Europe and ruled a global empire. This is an exceptional achievement by one of the very best cultural historians in the field, combining the art, architecture, literature, social values, political ideas, religious practices, and especially, the thought of Renaissance and Baroque Spain in a coherent and convincing synthesis. Grounded in solid, up-to-date scholarship, it is an invaluable resource for historians, while its lucid style makes this fascinating subject accessible to the general reader. Destined to become a classic of European cultural history."
— Edwin Williamson, author of "The Penguin History of Latin America"

"Another fundamental work by one of Britain’s foremost scholars on the Spanish Golden Age. Robbins delivers a masterful analysis of the intellectual, literary, and visual culture of the global Hispanic world in the early modern period."
— Rodrigo Cacho, professor of early modern Iberian and Latin American literature, University of Cambridge