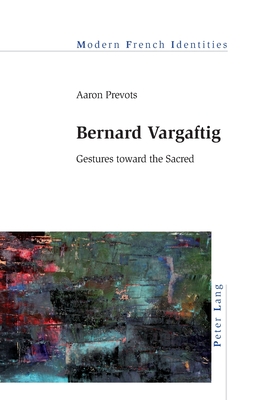 This is book number 134 in the Modern French Identities series.

The French poet Bernard Vargaftig (1934-2012), first known in 1960s literary circles as a writer mentored by Aragon, published regularly and served on the editorial boards of Action po tique and Europe. His poetry foregrounds identity and alterity, eros and notions of self, an immediate present and an onrushing past. This book examines Vargaftig's evolution and aims. It explores his postwar search for self-acceptance, ontological rootedness and shared forward paths. Using close readings of his poetry and prose, complemented by his comments in interviews, the book particularly considers his emphasis on the sacredness of words. His spiritual yearnings, as well as a need to heal due to lingering trauma from wartime hiding, are shown to underlie his focus on allusive imagery, recurring motifs and compact structures, where silence and sound interweave. Comparative analyses are used to show how his enthusiasm for the female Other attunes us to interpersonal bonds and to the outer world's creative surge. The study of Vargaftig through the lens of gestures toward the sacred thus highlights poetry as a healing ritual, one that facilitates not only immersion in emotion and sensation, but also a continual process of renewal and self-discovery.