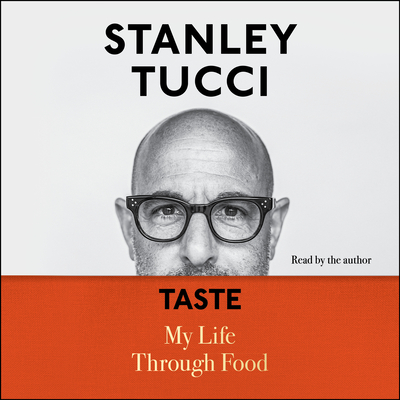 
This title is likely unavailable. Email or call for price and availability.
INSTANT NEW YORK TIMES BESTSELLER From award-winning actor and food obsessive Stanley Tucci comes an intimate and charming memoir of life in and out of the kitchen. Stanley Tucci grew up in an Italian American family that spent every night around the kitchen table. He shared the magic of those meals with us in The Tucci Cookbook and The Tucci Table, and now he takes us beyond the savory recipes and into the compelling stories behind them.​ Taste is a reflection on the intersection of food and life, filled with anecdotes about his growing up in Westchester, New York; preparing for and shooting the foodie films Big Night and Julie & Julia; falling in love over dinner; and teaming up with his wife to create meals for a multitude of children. Each morsel of this gastronomic journey through good times and bad, five-star meals and burned dishes, is as heartfelt and delicious as the last. Written with Stanley's signature wry humor, Taste is for fans of Bill Buford, Gabrielle Hamilton, and Ruth Reichl--and anyone who knows the power of a home-cooked meal.
Italian-American actor Stanley Tucci was born in New York in 1960. He has directed five films and appeared over seventy films, including The Devil Wears Prada, Easy A, The Terminal and Road to Perdition, as well as more than a dozen plays, on and off Broadway. He starred in Julie & Julia, opposite Meryl Streep, and The Lovely Bones, for which he earned his first Academy Award nomination, for Best Supporting Actor. He is the winner of two Golden Globes and two Emmys. Tucci's foody TV show, Stanley Tucci: Searching for Italy, recently aired on CBS and is Emmy nominated.