The Art of Luca (Hardcover) 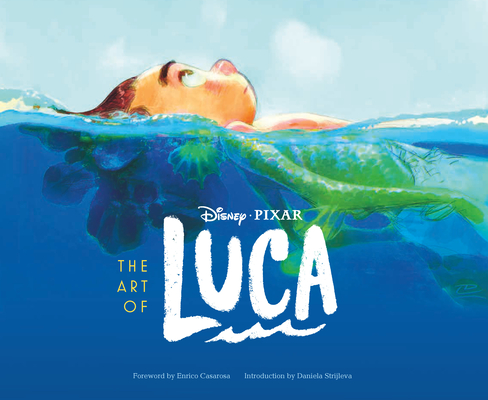 The Art of Luca (Hardcover)

By Enrico Casarosa (Foreword by), Daniela Strijleva (Introduction by)


Backordered - ETA Unknown
This vibrant volume is an exclusive look behind the scenes of Disney and Pixar's original feature film Luca.

The Art of Luca explores the stunning visuals of the coming-of-age story, set in a beautiful seaside town on the Italian Riviera. Readers get a front-row view at never-before-seen development art, character sketches, storyboards, color scripts, and interviews with the creators.

In the animated film, Luca and his newfound best friend are sharing an unforgettable summer and a deeply-held secret: they are sea monsters from a world just below the water's surface.

For aspiring artists, animators, and fans alike, The Art of Luca is part of the acclaimed ART OF series, inviting audiences behind the scenes of their favorite animated films.

This book is perfect for:
• Pixar fans and art buffs
• Animators and students of animation
• Fans of The Art of Pixar, The Art of Soul, The Art of Onward and The Art of Coco

© 2021 Disney/Pixar. All rights reserved.
"It teaches you endless things about the animation feature film process but does not give too much away about the film itself. I expect that it may make you even more excited to [see] Luca - which is precisely the effect it had on me."

"...takes you below the waves to discover a rich world of concept and character development art, swimming with fascinating facts and insider details from the movie’s creative team."

"This art book is a lot of fun to peruse—you get to see a lot of the character designs in particular, from sketches to clay models to digital models; I particularly enjoyed the drawings of various sea monsters in their sea and human forms. There’s also a lot about the design of the fictional Portorosso, which was inspired by the seaside towns where director Enrico Casarosa grew up (and had adventures with his own childhood friend Alberto)."