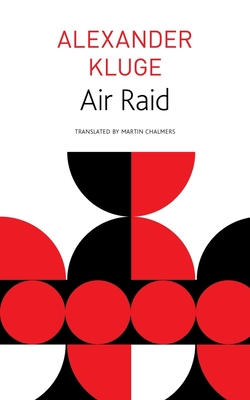 A powerful work by the heralded writer, this collection is a touchstone event in German literature of the post-war era.

On April 8, 1945, several American bomber squadrons were informed that their German targets were temporarily unavailable due to cloud cover. As it was too late to turn back, the assembled ordnance of more than two hundred bombers was diverted to nearby Halberstadt. A mid-sized cathedral town of no particular industrial or strategic importance, Halberstadt was almost totally destroyed, and a then-thirteen-year-old Alexander Kluge watched his town burn to the ground.

Incorporating photographs, diagrams, and drawings, Kluge captures the overwhelming rapidity and totality of the organized destruction of his town from numerous perspectives, bringing to life both the strategy from above and the futility of the response on the ground. Originally published in German in 1977, this exquisite report, fragmentary and unfinished, is one of Kluge’s most personal works and one of the best examples of his literary technique. The English edition of Air Rair includes additional new stories by the author and features an appreciation of the work by W. G. Sebald. “More than a few of Kluge’s many books are essential, brilliant achievements. None are without great interest.”—Susan Sontag

Alexander Kluge is one of the major German fiction writers of the late twentieth century and an important social critic. As a filmmaker, he is credited with the launch of the New German Cinema movement. Martin Chalmers is a Berlin-based translator from Glasgow. He has translated some of the best-known German-language writers, including Herta Müller, Elfriede Jelinek, and Hans Magnus Enzensberger.

“An accomplished filmmaker as well as a novelist, Kluge was trained as a lawyer and studied cultural theory with Theodor Adorno. An attorney’s reserve and gravitas are evident throughout his work. The harnessed energy is incorporated in various forms. . . . In Air Raid, one voice is followed by another—the testimonies of survivors, observations of reporters, explanations by American officers.”
— On the Seawall

“An extraordinary book by an extraordinary artist, Air Raid might be seen less as a reckoning with the second world war as a manual for grappling with manufactured realities and media-filtered landscapes in the age of the drone.”
— Financial Times

“Excellently and integrally translated. . . . Exquisite. . . . This multimedia work was ahead of its time, and it’s still effective; as long as aerial militarism continues to rain misery on millions, Air Raid remains timely.”
— Rain Taxi