Conan - Blood of the Serpent: The All-New Chronicles of the Worlds Greatest Barbarian Hero (Hardcover) 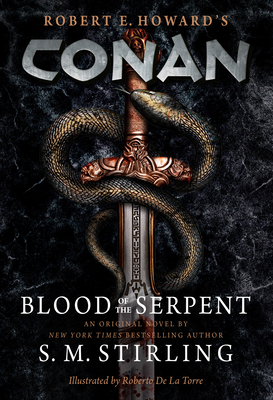 Conan - Blood of the Serpent: The All-New Chronicles of the Worlds Greatest Barbarian Hero (Hardcover)


Available for Pre-Order Now
The pulse-pounding return of Conan, the most iconic fantasy hero in popular culture, with a brand-new standalone novel by New York Times bestselling author S.M. Stirling, tied directly to the famous tales written by the legendary Robert E. Howard.

Conan the Barbarian, the world’s most famous fantasy hero, returns in an all-new novel tied directly to the famous works by his legendary creator, Robert E. Howard.

Set early in his life, Conan has left his northern homeland to cut a bloody swath across the legendary Hyborian Age. A mercenary, a soldier, a thief, and a pirate, he faces conquering armies, malicious sorcerers, and monstrous creatures—against which he wields only the sword held in his powerful grasp.

A superstar of novels, short fiction, comics, video games, films, and an upcoming Netflix series, his adventures have inspired many of the most popular authors of the 20th and 21st centuries. This is the first in a series of brand-new, standalone adventures.
A writer by trade, born in France but Canadian by origin, S. M. Stirling is a former lawyer, an amateur historian, and the New York Times bestselling author of numerous SF and fantasy novels including the popular “Nantucket” series that began with Island in the Sea of Time. He loves history, anthropology, and archaeology. Martial arts were his main physical hobby. Stirling lives in New Mexico, and tweets @Joatsimeon.