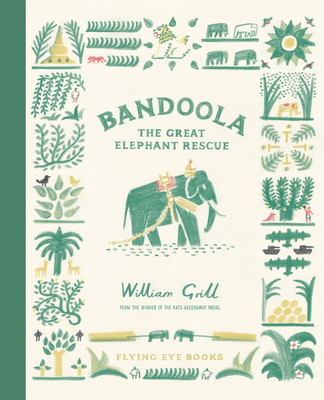 
Available in Warehouse. Wait for Email Confirmation for ETA
In this moving tale, join war veteran James Howard Williams as he encounters Bandoola, a working Asian elephant, and his keeper, Po Toke for the first time. A valuable story that captures the realities of deforestation, elephant endangerment, and the exploitation of nature. The perfect kids history book for ages 9-12.

"This remarkable book is a must-read."
—Booklist STARRED REVIEW

Working together on a teak plantation, Williams and Bandoola develop a rare friendship, which even today set standards around elephant care and conservation.

When another war forces them to leave their home in the Burmese jungle, the two undertake a journey that will test their friendship, taking trust, understanding and bravery to the very limit. Together, they lead a group of refugees and over 70 elephants to safety, scaling 5000 ft mountains as they cross the border from Burma into northern India.

Parents on the search for fact and animal books for kids ages 8-12 will be excited by the rich trove of information this lovely book hosts.
William Grill is a London based illustrator whose main interest lies in narrative illustration and publishing. He draws most of his inspiration from the natural world, and enjoys working in colored pencils and relief printmaking; his first book Shackleton's Journey won the 2015 Kate Greenaway award and was named one of the New York Times' Best Illustrated Books. It has been translated into over 14 languages. As well as running a weekly art club William has given workshops at The Design Museum, Southbank Centre, schools and universities.
STARRED REVIEW from Booklist
A Junior Library Guild Selection
Selected by The Children's Book Council for their March Hot Off The Press Reading list

"A sensitive retelling of a timber elephant's role in WWII"
—Colossal


“This picture book will sweep you off your feet, bring you to tears and ignite a fire in your heart to do something about saving elephants! A heroic journey that you’ll never forget. This is an absolute must read! We could not put it down!”
—Inclusive Children’s Books