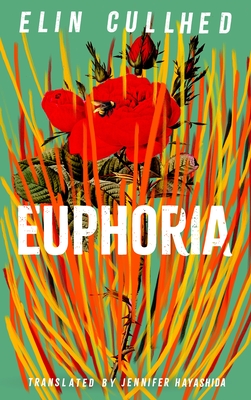 A woman's life, erupting with brilliance and promise, is fissured by betrayal and the pressures of duty. What had once seemed a pastoral family idyll has become a trap, and she struggles between being the wife and mother she is bound to be and wanting to do and be so much more.

The woman in question is Sylvia Plath in the final year of her life, reimagined in fictive form by Elin Cullhed, who seizes the flame of Plath's blistering, creative fire in Euphoria, lending a voice to women everywhere who stand with one foot in domesticity and the other in artistic creation. As Plath's marriage to Ted Hughes unravels through the heady days of their first summer in Devon together, Sylvia turns increasingly to writing to express her pain and loss, yet also her resilience and power. She has decided to die, but the art she creates in her final weeks will set her name, and the world, ablaze.
Elin Cullhed (1983) made her debut in 2019 with her critically lauded YA novel The Gods (published in Sweden as Gudarna). Euphoria is her first novel for adults. Cullhed became obsessed with the life and work of Sylvia Plath when she found herself in a similar position: mother to several young children, wife of another writer, struggling to find space and time for her own work. Euphoria is a meticulously researched work of historical fiction, drawing extensively from Plath's own journals and work from this time. Elin lives in Sweden.