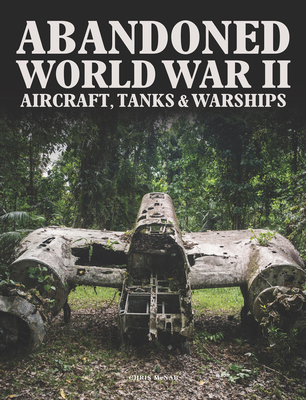 
Available in Warehouse. Wait for Email Confirmation for ETA
Illustrated with more than 150 unique photographs, Abandoned World War II Weapons allows the history buff and general reader to explore the detritus of this great, destructive conflict in every part of the world. The scattered remains of a German bomber on Spitsbergen Island; Sherman tanks waterlogged off Omaha Beach; Japanese merchant ships sunk off the coast of New Guinea. More than 75 years after the end of World War II, the conflict's legacy can still be seen from the Arctic wastes to the Solomon Islands of the South Pacific. The six years of World War II produced a greater number and variety of weapons than any other conflict before or since. This included more than 5 million tanks, armored fighting vehicles, and other self-propelled weapons; 8 million artillery guns; almost a million military aircraft; more than 50,000 ships and submarines; as well as many millions of rifles, machine guns, and handguns. Today, in every corner of the world, the remnants of this epic conflict can still be seen. Long-buried partisan weapons caches in the Belorussian forest; sand-covered trucks in the Sahara desert; crashed American bombers and Japanese anti-aircraft guns in the jungles of New Guinea; tank wrecks on old military training grounds; thousands of unexploded bombs in the depths of the world's seas and oceans; or the hundreds of aircraft and 30 Japanese ships destroyed in Truk Lagoon, the biggest graveyard of ships in the world and today a popular dive site.

Chris McNab has written more than 100 titles, primarily focused on historical and military topics. His titles include Weapons of War: AK47, 20th-Century Small Arms, A History of the World in 100 Weapons, and The Illustrated History of the Vietnam War. In addition to his writing work, Chris has made regular contributions to radio and TV programs. He also works as an educational publishing consultant, advising international agencies on how to develop their textbooks and other educational resources.