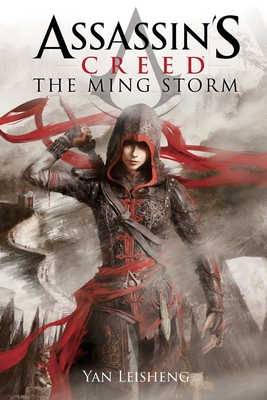 
Available in Warehouse. Wait for Email Confirmation for ETA
The Ming dynasty becomes a battleground for the Brotherhood of Assassins and the Order of the Templars in this blockbuster action novel from a previously unexplored part of the beloved Assassin’s Creed universe.

China, 16th century. The Assassins are gone. Zhang Yong, the relentless leader of the Eight Tigers, took advantage of the emperor's death to eliminate all his opponents, and now the Templars hold all the power. Shao Jun, the last representative of her clan, barely escapes death and has no choice but to flee her homeland. Vowing to avenge her former brothers in arms, she travels to Europe to train with the legendary Ezio Auditore. When she returns to the Middle Kingdom, her saber and her determination alone will not be enough to eliminate Zhang Yong: she will have to surround herself with allies and walk in the shadows to defeat the Eight Tigers.
YAN LEISHENG has had a special interest in science fiction since an early age, but it wasn't until his thirties that he was first published. Since then, he has published twenty books, including novels, short story collections, essays, and poetry. His most famous trilogy “Heaven Prevails” has sold over 500,000 copies in Chinese.
"It’s a fast-paced fantasy, and I had so much fun reading it! My absolutely favorite part is that the author has made this book feel so authentic, with little author notes, explaining certain traditions, details, characters, items. Great job!"
— Wandering Through The Pages

"If you enjoy Chinese dramas and the like, you'll adore this. Prior knowledge of the Assassin's Creed games or novels isn't even necessary... The next two novels are bound to be just as good as this one."
— The Girl Who Reads

"Assassin's Creed: The Ming Storm might be based upon a video game, but it felt like a book that was purely its own creation. It's a book that cares more about crafting a living breathing world, filled with characters that have a lot of depth, who the readers can come to understand. "
— Trans-Scribe