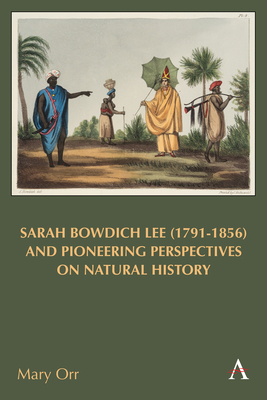 History from below has particular advantages. It uncovers overlooked protagonists in (inter)national endeavour for their importance and wider significance, and plots triumphs of discovery and contribution to knowing where they are supposed not to occur. One such figure is (British-born) Sarah n e Wallace, Mrs T. Edward Bowdich then Mrs R. Lee (1791-1856). Despite her multiple contributions to new natural history and its dissemination in both France and Britain in the first half of the nineteenth century, no monograph study has attended to her life's work in natural history for its interdisciplinary range and perspectives or explored its intercultural significance through dissemination in the double contexts of French and British science.

In making good these omissions this book is then much more than a first recuperation and examination of Sarah's unbroken production of science publications intermediating 'French' and 'British' natural history in several different fields and multiple genres from 1825 until her death in 1856. Sarah's productivity was also achieved at a great personal cost: she had to start over 'from nothing' several times throughout her 'career'. These lynch-pin moments frame the three main sections of the book, and the chapters each contain, as a case study that can better draw attention to the circumstances and conditions that Sarah overcame and in which her unheralded contributions and triumphs were achieved. Since at least one 'small' achievement in scientific endeavour merges in each chapter, the record can be set straight concerning Sarah's importance at the forefront of new sub-disciplines in French as well as British science from the 1820s to the 1850s, for example, ichthyology (in Part One), ethnography (in Part Two) and science dissemination and education (in Part Three).

The lynch-pin moments and framing conditions of production informing it add significant creative and pragmatic twists to a story of overcoming seemingly impossible personal and sociocultural odds. Sarah's is then a fascinating case study and historical precedent for re-examining women's 'uneasy careers' (Abir-Am and Outram, 1989) in the history of science, and 'leaky pipeline' modelling in STEM(M) today. The book's closing inquiry thus calls for new perspectives following Sarah's example, to challenge the understanding of 'serious' vs 'popular' and 'citizen' science, gender and science and ongoing debate about the 'quandaries' of women's work in scientific fields. The possibility, creativity and distinction of Sarah's story is the distinguishing feature of this book.

Mary Orr is the Buchanan Chair of French at the University of St Andrews. Her specialist research in nineteenth-century French studies connects its literature, histories and cultures including the natural and earth sciences.