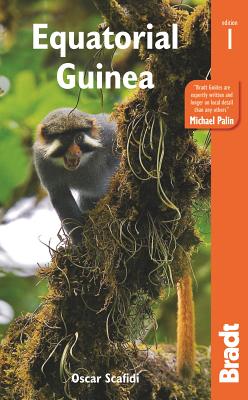 
This title is likely unavailable. Email or call for price and availability.
This is the only English language guide to Equatorial Guinea, one of the last truly unexplored corners of sub Saharan Africa. Ranked by the United Nations among the ten least visited countries in the world, this tiny nation is slowly opening up thanks to the discovery of vast oil reserves in the nineties and the resultant influx of foreign workers and capital. In 2004 Equatorial Guinea gained worldwide notoriety following British former SAS Officer Simon Mann's failed coup d' tat. However, there is much more to this tiny nation than international political intrigue and mercenaries. From the oil rich capital of Malabo on the volcanic island of Bioko, set out to explore the jungle interior via the Spanish colonial outpost of Bata. Here you will find pristine national parks teeming with wildlife, incredible white sand beaches and a wealth of small, traditional communities. The authorities will not make it easy, but a few shakedowns and the mountains of red tape are a small price to pay for such a unique experience in the heart of tropical Africa's only Spanish speaking nation. With first-hand descriptions of all seven provinces (including the islands and the mainland), plus practical details, this is all the information you need to successfully tackle this challenging but rewarding travel experience.
Oscar Scafidi has spent the last five years living and teaching in Africa while writing about his experiences. He has visited over twenty countries on the continent and recently co-authored the second edition of the Bradt Guide to Angola. Armed with a solid grasp of English, French, Portuguese, Spanish and Italian, as well as experience travelling to difficult destinations such as Somalia, Yemen and Afghanistan, Oscar is well qualified to write the first English language guidebook to Equatorial Guinea. Oscar Scafidi is originally from the UK and Italy and has spent the past five years living and working in Africa as a history teacher. While not teaching, Oscar also writes travel journalism focusing on difficult destinations such as Somalia, Afghanistan, Liberia and East Timor. Some of his work can be found on the adventure travel website Polo's Bastards.