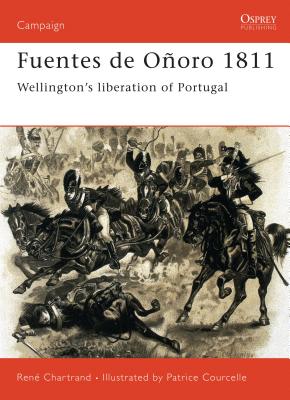 This is book number 99 in the Campaign series.

This Osprey title examines the crucial campaign culminating in the hard-fought battle that finally drove the French from Portugal during the Napoleonic Wars (1799-1815). In October 1810 the Allied position in Portugal appeared precarious. Despite defeating Marshal Masséna's French army at Bussaco, Wellington had been forced to retreat to within a few miles of Lisbon. Here the French encountered a massive line of fortifications stretching from the River Tagus to the sea. Built amid great secrecy and on Wellington's specific orders, these Lines of Torres Vedras were the French high-water mark. In February, with his army on the point of starvation, Masséna was forced to retreat and the scene was set for the climactic action of Fuentes de Oñoro.
René Chartrand was born in Montreal and educated in Canada, the United States and the Bahamas. A senior curator with Canada's National Historic Sites for nearly three decades, he is now a freelance writer and historical consultant. He has written numerous articles and books including almost 20 Osprey titles and the first two volumes of Canadian Military Heritage. He lives in Hull, Quebec, with his wife and two sons.