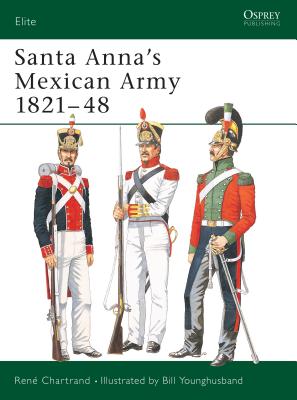 This is book number 102 in the Elite series.

Osprey's examination of the Mexican Army of Santa Anna, from 1821 to 1848. Detailed information on the Mexican Army which fought the Texans in the Battle of the Alamo (1836) and the US Army in its first important foreign war ten years later, is notoriously elusive. In this ground-breaking book an internationally respected military historian presents a mass of new information from Mexican archives and a variety of other contemporary sources. For the first time the armies of the notorious General Santa Anna are explained coherently for the English-speaking reader, and their frequently changing and unevenly issued uniforms are illustrated with early prints, portraits, photos of rare surviving items, and meticulous colour reconstructions.
René Chartrand was born in Montreal and educated in Canada, the United States and the Bahamas. A senior curator with Canada's National Historic Sites for nearly three decades, he is now a freelance writer and historical consultant. He has written numerous articles and books including some 20 Osprey titles and the first two volumes of 'Canadian Military Heritage'. He lives in Hull, Quebec, with his wife and two sons.