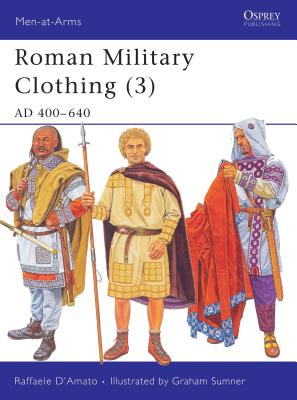 This is book number 425 in the Men-at-Arms series.

This book is the concluding part of a rigorous study of theliterary, sculptural, pictorial and archaeological evidence for Roman military clothing, covering the last days of the Western Empire, and the much longer record of the Eastern, in the 5th to 7th centuries. The evidence from this enormously colourful period – when Germanic and Persian styles, first introduced by mercenaries, were widely adopted by Roman armies – is particularly rich. The text is illustrated with many photographs of rare textile finds, and mosaic artwork; with careful drawings of other figurative sources; and with Graham Sumner's meticulous and dazzling colour reconstructions.
Dr Raffaele D'Amato, born in 1964, obtained a PhD in Romano-Byzantine Law in 1993 at the University of Turin. While practising as a jurist he has pursued his passion for early military history, publishing a number of specialist articles and booklets. He is currently collaborating with Prof Kolias of Athens University on research into the arms and armours of the Eastern Roman army, while studying with Prof Ravegnani of the University of Venice to obtain a second degree in Byzantine history. This is his first book for Osprey.