Norse Romance: Volume II: The Knights of the Round Table (Arthurian Archives #4) (Paperback) 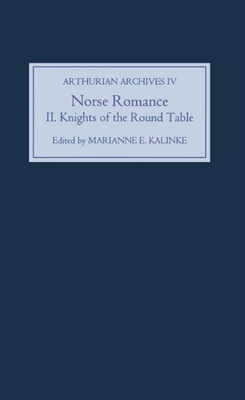 Norse Romance: Volume II: The Knights of the Round Table (Arthurian Archives #4) (Paperback)

This is book number 4 in the Arthurian Archives series.

The Knights of the Round Table is devoted to translations and adaptations of French narratives featuring King Arthur's knights. It contains prose translations of three of Chr tien de Troyes's Arthurian romances, including atranslation of Perceval. Erex saga diverges considerably in content and structure from the French source and most likely represents a thorough revision by an Icelander of what was originally a Norwegian translation.Additionally, the volume contains both an Old Norse translation and an Icelandic adaptation of the French Lai du cort mantel, the ribald story of a chastity-testing mantle at King Arthur's court.

Professor MARIANNE E. KALINKE teaches in the Department of Germanic Languages and Literatures at the University of Illinois at Urbana-Champaign.