The Medieval Romance of Alexander: The Deeds and Conquests of Alexander the Great (Paperback) 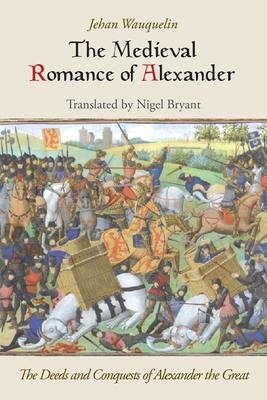 The Medieval Romance of Alexander: The Deeds and Conquests of Alexander the Great (Paperback)


Available in Warehouse. Wait for Email Confirmation for ETA
The figure of Alexander the Great haunted the medieval imagination - as much as Arthur, as much as Charlemagne. His story was translated more often in medieval Europe than any work except the Gospels. Yet only small sections of the Alexander Romance have been translated into modern French, and Nigel Bryant's is the first translation into English.
The Deeds and Conquests of Alexander the Great is Jehan Wauquelin's superb compendium, written for the Burgundian court in the mid-fifteenth century, which draws together all the key elements of the Alexandrian tradition.With great clarity and intelligence Wauquelin produced a redaction of all the major Alexander romances ofthe twelfth, thirteenth and fourteenth centuries - including the verse Roman d'Alexandre, The Vows of the Peacock and La Venjance Alixandre - to tell the whole story of Alexander's miraculous birth and childhood, hisconquests of Persia and India, his battles with fabulous beasts and outlandish peoples, his journeys in the sky and under the sea, his poisoning at Babylon and the vengeance taken by his son.
This is an accomplished and exciting work by a notable writer at the Burgundian court who perfectly understood the appeal of the great conqueror to ambitious dukes intent upon extending their dominions. NIGEL BRYANT has translated five major Arthurianromances from medieval French, including Perceforest in which Alexander features prominently. He has also translated the fourteenth-century chronicles of Jean le Bel.