Artificial Hells: Participatory Art and the Politics of Spectatorship (Paperback) 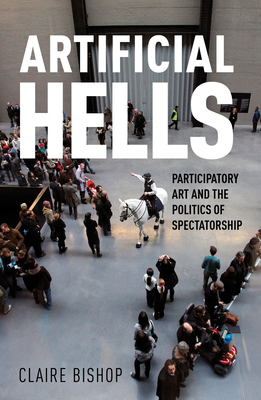 Artificial Hells: Participatory Art and the Politics of Spectatorship (Paperback)


Available in Warehouse. Wait for Email Confirmation for ETA
Since the 1990s, critics and curators have broadly accepted the notion that participatory art is the ultimate political art: that by encouraging an audience to take part an artist can promote new emancipatory social relations. Around the world, the champions of this form of expression are numerous, ranging from art historians such as Grant Kester, curators such as Nicolas Bourriaud and Nato Thompson, to performance theorists such as Shannon Jackson.

Artificial Hells is the first historical and theoretical overview of socially engaged participatory art, known in the US as &ldquo;social practice.&rdquo; Claire Bishop follows the trajectory of twentieth-century art and examines key moments in the development of a participatory aesthetic. This itinerary takes in Futurism and Dada; the Situationist International; Happenings in Eastern Europe, Argentina and Paris; the 1970s Community Arts Movement; and the Artists Placement Group. It concludes with a discussion of long-term educational projects by contemporary artists such as Thomas Hirschhorn, Tania Bruguera, Pawe? Althamer and Paul Chan.

Since her controversial essay in Artforum in 2006, Claire Bishop has been one of the few to challenge the political and aesthetic ambitions of participatory art. In Artificial Hells, she not only scrutinizes the emancipatory claims made for these projects, but also provides an alternative to the ethical (rather than artistic) criteria invited by such artworks. Artificial Hells calls for a less prescriptive approach to art and politics, and for more compelling, troubling and bolder forms of participatory art and criticism.
Claire Bishop is Associate Professor in the History of Art department at the CUNY Graduate Center, New York. She is the author of Installation Art: A Critical History; Artificial Hells: Participatory Art and the Politics of Spectatorship; and editor of Participation. in 2008 she co-curated the exhibition &ldquo;Double Agent&rdquo; at the ICA. She is a regular contributor to Artforum, October, Tate Etc, IDEA, and other international art magazines.
&ldquo;Claire Bishop has articulated an important historical overview of the global emergence of participatory art ... Her controversial and thought-provoking conclusions courageously trouble our assumptions about the effectiveness of political artworks, questioning their oppositional quality, their effects on the audiences they reach, and their relation to the institutions that promote them.&rdquo;—Frank Jewett Mather Award, 2013

&ldquo;An essential title for contemporary art history scholars and students as well as anyone who has witnessed a participatory art &lsquo;happening&rsquo; and thought, &lsquo;Now that&rsquo;s art!&rsquo; or &lsquo;That&rsquo;s art?&rsquo;&rdquo;—Library Journal

&ldquo;Bishop seeks a standard for judging participatory works...She draws on the writings of French philosopher Jacques Rancière to argue that art must maintain a degree of autonomy and unreadability in order to resist co-option by the political and economic forces intent on imposing a false social consensus.&rdquo;—Eleanor Heartney, Art in America

&ldquo;The good intentions of contemporary artists frequently pave a road to hell. Claire Bishop follows their descent into the inferno and invites her readers to share her fascination with what she finds along the way. Artificial Hells combines vast historical knowledge with a precise analysis of individual artistic practices. So much so that at the end of her new book we have begun to fall in love with hell—under the condition that it remains artificial.&rdquo;—Boris Groys, author of Art Power