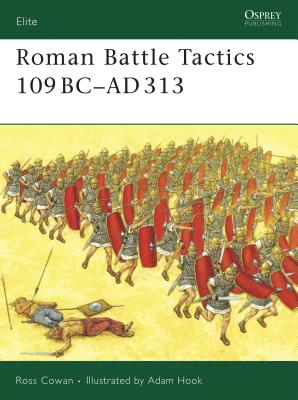 
This title is likely unavailable. Email or call for price and availability.
The book clearly explains and illustrates the mechanics of how Roman commanders - at every level - drew up and committed their different types of troops for open-field battles. It includes the alternative formations used to handle different tactical problems and different types of terrain; the possibilities of ordering and controlling different deployments once battle was joined; and how all this was based on the particular strengths of the Roman soldier. Covering the period of "classic" legionary warfare from the late Republic to the late Western Empire, Ross Cowan uses case studies of particular battles to provide a manual on how and why the Romans almost always won, against enemies with basic equality in weapon types - giving practical reasons why the Roman Army was the Western World's outstanding military machine for 400 years.
Ross Cowan was formerly a research student at the University of Glasgow where he was recently awarded a PhD for a thesis on the Roman army entitled 'Aspects of the Severan Field Army AD 193-238'. The major themes of the thesis are the organization of the Praetorian Guard and Legio II Parthica, their recruitment, numbers and equipment. Ross also completed his first degree at Glasgow. In 1999 he was elected a fellow of the Society of the Antiquaries of Scotland. The author lives in Glasgow, Scotland.

“The Roman Army was not only the greatest military machine in the Western world for at least 4 centuries, the Roman Army was the foundation of the Western military tradition. This title contains the battle plans & colour interpretations of tactical scenarios.” —Neoproprealism Journal (May 2008)

“Overall, this was an excellent book and directly addresses matters of interest to wargamers. The content can be immediately turned to use by developing scenarios from the diagrams provided. In the longer term, I think this book will create a greater appreciation among gamers of the difficulty in developing rules that adequately simulate the command and control and maneuver found on an ancient battlefield.” —tabletopgamingnews.com (August 2007)

“...illustrated using photos of extant art from that period and the superb historical reconstructions of illustrator Adam Hook. His work brings to life what can be a bit complicated or esoteric to many readers... A book you'll enjoy reading and one that I can recommend to you along with any other Osprey title.” —Scott Van Aken, modelingmadness.com (July 2007)