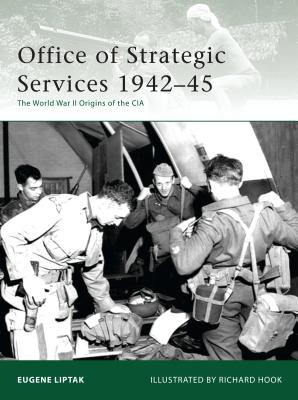 This is book number 173 in the Elite series.

Osprey's elite series title for the origins of the CIA during World War II (1939-1945). The Office of Strategic Services, the forerunner of the Central Intelligence Agency, was founded in 1942 by William 'Wild Bill' Donovan under the direction of President Roosevelt, who realized the need to improve intelligence during wartime. A rigorous recruitment process enlisted agents from both the armed services and civilians to produce operational groups specializing in different foreign areas including Italy, Norway, Yugoslavia and China. At its peak in 1944, the number of men and women working in the service totaled nearly 13,500.

This intriguing story of the origins and development of the American espionage forces covers all of the different departments involved, with a particular emphasis on the courageous teams operating in the field. The volume is illustrated with many photographs, including images from the film director John Ford who led the OSS Photographic Unit and parachuted into Burma in 1943.

Richard Hook is an internationally acclaimed artist, renowned for his paintings of Native American culture.

“Eugene Liptak's Office of Strategic Services provides a review of the US wartime espionage and covert operations agency during the war, following their tactics and the conflicts behind their operations. Rare photos and original artwork lends to the effort.” —The Bookwatch (December 2009)

“Author Eugene Liptak does a great job of telling the story of this large and quite varied organization, going through and explaining the various sections such as Secret Intelligence, Special Operations, X-2 Counterespionage, Communications, Research and Analysis and many others. It also covers some of the more successful operations in North Africa, Norway, Italy, China, and Thailand, to name a few.” —Scott Van Aken, Modeling Madness (November 2009)