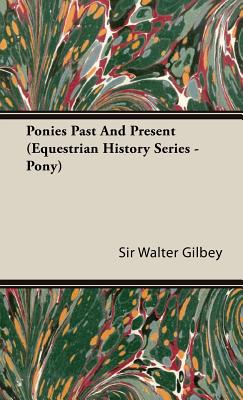 
Available in Warehouse. Wait for Email Confirmation for ETA
This book cannot be returned, cancelled, or exchanged. Please call for availability and pricing
PONIES PAST AND PRESENT - THE BREEDS OF THE BRITISH ISLANDS. By Sir Walter Gilbey, Bart. Originally published in 1900, this rare early work on Native British Ponies is both expensive and hard to find in its first edition. READ COUNTRY BOOKS has republished it using the original text and illustrations. The author was a respected authority on all equestrian matters and published several important books on the subject as well as contributing numerous articles to the sporting and farming press of that era. This title was the first comprehensive work on British Ponies ever written, and the first to draw attention to their important contribution to polo pony breeding. The book consists of one hundred and thirty six pages, including eight full page plates. A lengthy introduction takes the reader through some of the early history, origins, and laws relating to the pony breeds. This is followed by eight Detailed chapters: The New Forest Pony. The Welsh Pony. The Exmoor and Dartmoor Ponies. The Cumberland and Westmoreland Ponies. Ireland The Connemara Pony. The Ponies of Scotland and the Shetland Islands. Uses and Characteristics of the Pony. Breeding Polo Ponies. This is a fascinating read for any pony enthusiast or historian of the breeds, and also contains much information that is still useful and practical today. Many of the earliest equestrian books, particularly those dating back to the 1900s and before, are now extremely scarce and increasingly expensive. READ COUNTRY BOOKS are republishing these classic works in affordable, high quality, modern editions, using the original text and artwork.