Protestant Missionaries & Humanitarianism in the Drc: The Politics of Aid in Cold War Africa (Hardcover) 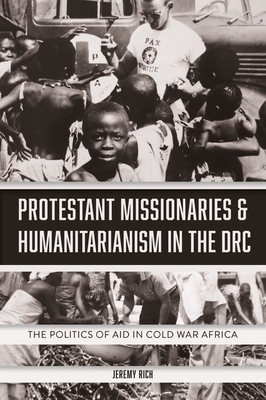 Protestant Missionaries & Humanitarianism in the Drc: The Politics of Aid in Cold War Africa (Hardcover)


Available in Warehouse. Wait for Email Confirmation for ETA
This book cannot be returned, cancelled, or exchanged. Please call for availability and pricing
In the wake of the civil wars in Congo from 1960 to 1973, international and internal struggles for power led to famines, the collapse of public health and a huge population of refugees. This book explores the role played by missionaries from the US, Canada and the UK who organized aid, and shows how they had to redefine their roles in independent Africa after the end of colonialism. Partnering US government officials to overcome the humanitarian crisis as the politics of aid threatened to sink their efforts, Protestant aid programs also worked with US-backed Congolese military efforts to crush leftist rebels and joined with Angolan rebels to help hundreds of thousands of Angolan refugees fleeing Portuguese colonialism. After Mobutu Sese Seko seized power in 1965, they found themselves adjusting with difficulty to the rise of Congolese religious leaders who demanded aid workers and donor agencies accept African control over development projects.
In this examination of the changing history of humanitarianism in Central Africa, the author shows how aid workers, who believed themselves to be politically neutral humanitarians, had to question their privileged role, and negotiate new ways of collaboration. Offering material aid and support, they hoped to heal the wounds of colonial repression and the violence of independence - abandoned hospitals, starving refugees, economic recession - yet also sought to ensure a Christian Congo would emerge allied to Western countries. The author explores the role of Protestant aid workers in the ethnic violence of South Kasai province; shows how Protestant aid became a tool in US-back counterinsurgency campaigns against leftist rebels; examines the interplay of Congolese and Western medicine in the work of Protestant medical volunteers; and discusses conflict in the aims of the missionaries and Africans over the control of aid funds and aid initiatives.