Roman Centurions 753–31 BC: The Kingdom and the Age of Consuls (Men-at-Arms) (Paperback) 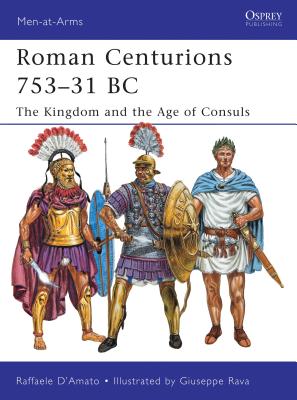 Roman Centurions 753–31 BC: The Kingdom and the Age of Consuls (Men-at-Arms) (Paperback)

This is book number 470 in the Men-at-Arms series.

A perennially popular topic the ancient world continues to yield incredibly rich archaeological finds. Based on years of detailed research, Dr Raffaele D'Amato now presents a new history on the dress and equipment of Roman Centurions from the Roman kingdom to the height of the Republic. In addition, thanks to his detailed research amongst Roman gravestones, the book also includes several reconstructions of actual named individuals and two lavish scenes showing combat between two Centurions and a Triumphal procession.
Raffaele D'Amato, PhD, is the author of some 40 books and numerous articles on the military of Ancient Greece, the Roman Empire including Byzantium, and medieval Europe. He has taught at the University of Ferrara, and for two years as a visiting professor at Fatih University, Istanbul. He currently lives in England, working as an archaeological consultant and lawyer for Timeline Auctions Ltd of Harwich, and also as an external researcher for the Laboratory of the Danubian Provinces at the University of Ferrara.

Giuseppe Rava was born in Faenza in 1963, and took an interest in all things military from an early age. Entirely self-taught, Giuseppe has established himself as a leading military history artist, and is inspired by the works of the great military artists, such as Detaille, Meissonier, Röchling, Lady Butler, Ottenfeld and Angus McBride. He lives and works in Italy.