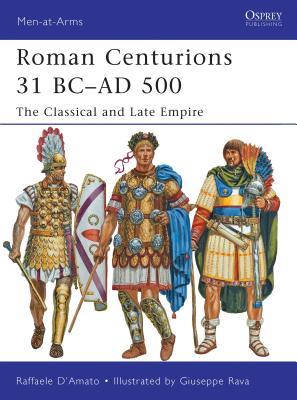 This is book number 479 in the Men-at-Arms series.

In the years between 31 BC and AD 500 the Romans carved out a mighty empire stretching from Britain to the deserts of North Africa. The men who spearheaded this expansion were the centurions, the tough, professional warriors who led from the front, exerted savage discipline and provided a role model for the legionaries under their command.

This book, the second volume of a two-part study, reveals the appearance, weaponry, role and impact of these legendary soldiers during the five centuries that saw the Roman Empire reach its greatest geographical extent under Trajan and Hadrian, only to experience a long decline in the West in the face of sustained pressure from its 'barbarian' neighbours. Featuring spectacular full-colour artwork, written by an authority on the army of the Caesars and informed by a wide range of sculptural, written and pictorial evidence from right across the Roman world, this book overturns established wisdom and sheds new light on Rome's most famous soldiers during the best-known era in its history.

Raffaele D'Amato, PhD, is the author of some 40 books and numerous articles on the military of Ancient Greece, the Roman Empire including Byzantium, and medieval Europe. He has taught at the University of Ferrara, and for two years as a visiting professor at Fatih University, Istanbul. He currently lives in England, working as an archaeological consultant and lawyer for Timeline Auctions Ltd of Harwich, and also as an external researcher for the Laboratory of the Danubian Provinces at the University of Ferrara.

Giuseppe Rava was born in Faenza in 1963, and took an interest in all things military from an early age. Entirely self-taught, Giuseppe has established himself as a leading military history artist, and is inspired by the works of the great military artists, such as Detaille, Meissonier, Röchling, Lady Butler, Ottenfeld and Angus McBride. He lives and works in Italy.
“...written by an authority on the era and offers a range of new approaches to the appearance and role of the early  centurions. Any early military history collection needs this.” —James A. Cox, The Midwest Book Review (August 2012)