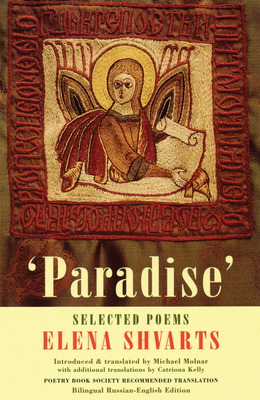 
Available in Warehouse. Wait for Email Confirmation for ETA
Elena Shvarts was the most outstanding Russian poet of her generation. 'Paradise' presents a dual language selection of her earlier poetry, and was a Poetry Book Society Recommended Translation. Each new generation has to reinterpret St Petersburg, the place, the culture and its significance for Russia. Shvarts's haunted and demonic city is nearer Dostoyevsky's than Akhmatova's or Brodsky's. Her poetry draws backwoods Russian folklore with its cruelty, its religiosity and its quaint humour, into stone, cosmopolitan Petropolis. She brings out both the truth and the irony of Peter the Great's 'Paradise', celebrating and reviling her native city as a crossroads of dimensions, a reality riddled with mythical monuments and religious symbols. Despite the blood beneath its pavements, her St Petersburg also reveals traces of an angelic origin: 'Black rats nest over the shining river, in undergrowth, / They're permitted, welcome, nothing can ruin paradise on earth.' Elena Shvarts stood outside all schools and movements in contemporary Russian poetry. She once famously described poetry as a 'dance without legs'. Her own poetry fits this description perfectly, a combination of deeply rhythmic and lyrical dance with the eccentric, perpetual movement of flight. The world of her poems is strange and grotesque; often the setting is urban, but unrecognisable - towns emptied of the everyday and peopled only by animals, spirits and strange elemental forces. A peculiar religious fervour illuminates these scenes, but her religion is unorthodox and highly individual. Shvarts's poetry is visionary. Her vision takes her to the edge of language and rhythm, and she was one of the few contemporary poets brave enough to trust her vision absolutely.
Elena Shvarts was the most outstanding Russian poet of her generation, as well as a prose writer of distinction. Born in St Petersburg in 1948, she studied at the Leningrad Institute of Film, Music and Theatre. The daughter of a theatre literary manager, she earned her living translating plays for Leningrad's theatres. Her poems were published in samizdat and abroad from the late 60s, but her first Russian publication, Circle, did not appear until 1984. Since then she has published more than ten collections of poetry. A book of prose pieces, including short autobiographical fragments, The Visible Side of Life, was published in 2003. She was awarded the Andrei Bely Literary Prize in 1979, and the Triumph Prize in 2003, an independent award for lifetime's achievement in the arts. Bloodaxe published two bilingual editions covering her earlier and later work, 'Paradise': Selected Poems (1993) and Birdsong on the Seabed (2008), both of which are Poetry Book Society Recommended Translations. She had just completed a book on the Italian poet D'Annunzio at the time of her death from cancer in 2010. Sasha Dugdale's translation of Birdsong on the Seabed was shortlisted for both the Rossica Translation Prize and the Corneliu M. Popescu Award for European Poetry in Translation.