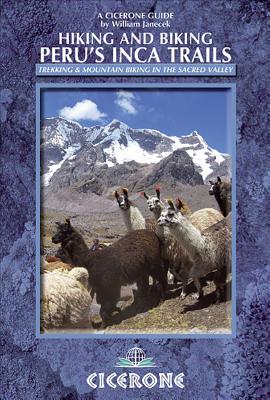 Guidebook to hiking and mountain biking in the Sacred Valley of Peru, including the Inca Trail. 40 routes (7 to Machu Picchu) visiting all major Incan sites discovered from Cusco, Urubamba, Ollantaytambo, Vilcabamba and in the remote region around Mount Ausangate. The routes are graded for difficulty, most routes can be done on foot or by mountainbike and timings are given for each, as well as advice on whether it is preferable to undertake a particular route with a local guide or trekking agency, in the less well-known areas. The guidebook includes practical information on getting to and around the area, how to make the most out of any trip as well as plenty of background detail on the Incan history and places of interest explored on the routes. The Andes are the second highest mountain range in the world, after the Himalaya, but they have the most spectacular range of altitude - from 6000m down to just above sea level - making for some thrilling MTB descents on ancient Incan roads. The area also has a spectacular collection of ancient Incan sites, with new sites yet to be uncovered, and is still farmed by the direct descendants of the Incas, often seen in their colourful traditional dress in the local villages.

Will 'KB' Janecek was born in the US, in Minnesota, where his father Bill introduced him to the outdoors. Following his passion for high mountains, he trekked and mountain biked a great deal of the world's ranges before settling in Peru, where he runs a trekking and mountain biking adventure company.