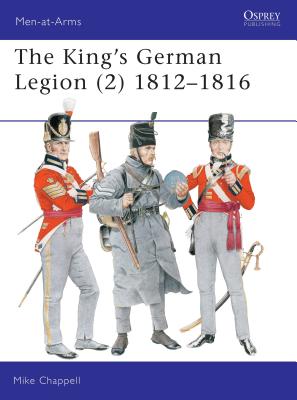 This is book number 339 in the Men-at-Arms series.

This title is the completion of a two-part study of the King's German Legion – the largest and most respected of the foreign corps which fought as integrated elements of the British Army during the Napoleonic Wars (1799-1815). The light and heavy cavalry, light and line infantry, and horse and foot artillery of the KGL made major contributions to Wellington's victories in the latter part of the Peninsular War (1808-1814), and several units covered themselves with glory at Waterloo. Drawing upon new research in British and Hanoverian archival sources, Mike Chappell's detailed text and meticulous illustrations offer unprecedented details of this impressive fighting organisation.
Mike Chappell comes from an Aldershot family with British Army connections stretching back several generations. He enlisted as a teenage private in the Royal Hampshire Regiment in 1952. Over the next 22 years of infantry soldiering, many of them spent with the Gloucester Regiment, he held every rank and many regimental appointments up to WO1 and Regimental Sergeant Major. he retired in 1974, as RSM of the 1st Battalion The Wessex Regiment (Rifle Volunteers), after seeing service in Malaya, Cyprus, Swaziland, Libya, Germany, Ulster and home garrisons. He began painting military subjects in 1968 and since then has gained worldwide popularity as a military illustrator. Mike has also written and illustrated many quality books in the Osprey Military list.