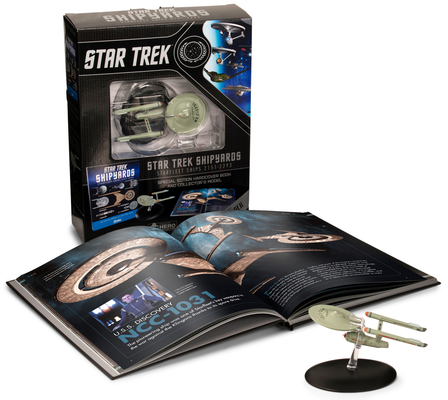 
This title is likely unavailable. Email or call for price and availability.
A chronological history of the Starfleet starships from Star Trek television shows and films, specially packaged with a die-cast collectible USS Enterprise!

250 years worth of Starfleet ships are profiled! Including Zefram Cochrane's ship The Phoenix, which made the first faster-than-light journey in human history, through Captain Kirk's famous Enterprise up to the Enterprise-B: the ship where Kirk was lost. Plus all of the Starfleet ships from the STAR TREK: DISCOVERY TV series!

Specially packaged with a die-cast collectible model of the iconic USS Enterprise from the original 1966 television series.

This in-depth reference book includes a technical overview and operational history for each ship and is illustrated with CG artwork, including original VFX models made for the TV show. Includes THE ENTERPRISE NX-01, THE U.S.S. DISCOVERY & THE U.S.S. ENTERPRISE NCC-1701

STAR TREK SHIPYARDS is a series of lavishly illustrated books that provide in-universe profiles of STAR TREK ships. Each ship is profiled with technical information, its operational history and much more.
Ben Robinson is best known as the man behind Eaglemoss's Official Star Trek Starships collection, which in the last three years has become the largest and best-regarded collections of model Star Trek ships ever produced.

This in-depth reference book, written by Ben Robinson, Marcus Riley, and Matt McAllister profiles Starfleet ships from the birth of the Federation to the launch of the U.S.S. Enterprise NCC-1701-B and the death of Captain Kirk. It also includes a chapter on Earth’s pre-Federation vessels, including Zefram Cochrane’s ship the Phoenix, which made mankind’s first faster-than- light journey. Plus all of the Starfleet ships from the first season of STAR TREK: DISCOVERY and the original STAR TREK TV series. The book is richly illustrated with CG artwork using the original VFX models created for the STAR TREK TV shows and movies.