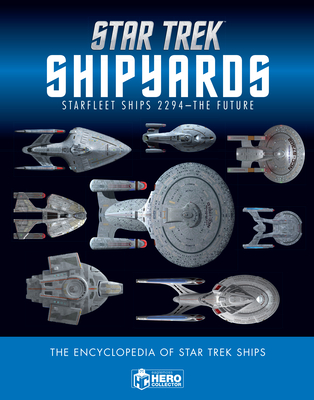 
This title is likely unavailable. Email or call for price and availability.
The second volume in a chronological history of the Starfleet starships in Star Trek TV and films, from the 24th century to the far future!

All the featured ships are illustrated with CG artwork, including original VFX models made for the TV show.

“Hero Collector’s Star Trek: Shipyards – Starfleet Ships 2294 – The Future is a brilliant looking Star Trek book and one that is worthy of belonging on any Trekkies bookshelf.” – Flickering Myth

“… really fun books that offer undoubtedly the most comprehensive in-universe guide to Star Trek starships ever assembled.” – The Trek Collective

This volume features small transports, fighters, multi-mission explorers and time traveling ships from the distant future. Each ship is illustrated with CG artwork, including original VFX models made for the TV show, alongside a technical overview and operational history. Chapters include size charts, showing the ships to scale. An appendix of class listings is featured at the back of the book.