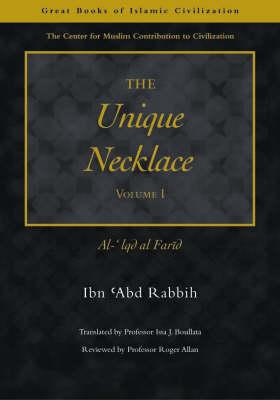 
This title is likely unavailable. Email or call for price and availability.
Al-Iqd al-Farid (The Unique Necklace), translated into English and now in paperback, is one of the classics of Arabic literature. Compiled in several volumes by an Andalusian scholar and poet named Ibn Abd Rabbih (246-328 H. / 860-940 C.E.), The Unique Necklace remains a mine of information about various elements of Arab culture and letters during the four centuries before his death. Essentially it is a book of adab, a term understood in modern times to specifically mean literature, but in earlier times its meaning included all that a well-informed person had to know in order to pass in society as a cultured and refined individual. This meaning later evolved and included belles lettres in the form of elegant prose and verse that was as much entertaining as it was morally educational - such as poetry, pleasant anecdotes, proverbs, historical accounts, general knowledge, wise maxims, and even practical philosophy. Ibn Abd Rabbih's imagination and organization saved his encyclopedic compendium from easily being a chaotic jumble of materials by conceiving of it as a necklace composed of twenty-five 'books, ' each of which carried the name of a jewel. Each of the twenty-five books was organized around a major theme and had an introduction written by Ibn Abd Rabbih, followed by his relevant adab selections of verse and prose on the theme of each 'book.' He drew on a vast repertoire of sources including the Bible, the Qur'an, and the Hadith; the works of al-Jahiz, Ibn Qutayba, al-Mubarrad, Abu Ubayda ibn al-Muthanna, and several others; and the diwans of many Arab poets including his own poetry. The Unique Necklace is a standard text for those interested in classical Arabic literature.
The translator Issa J. Boullata is a literary critic and scholar, who also writes fiction. Former Professor of Arabic Literature at McGill University, Montreal, Canada, he has published several books, including Trends and Issues in Contemporary Arab Thought (1990) and a novel in Arabic, Homecoming to Jerusalem (1998), in addition to numerous studies on Arabic literature, short stories in English, and translations of works by Ahmad Amin, Jabra Ibrahim Jabra, Mohamed Berrada, Ghada Samman, Emily Nasrallah, and others. Among his latest books are: Literary Structures of Religious Meaning in the Qur'an, ed., (2000) and, in Arabic, A Window on Modernism: Studies in the Works of Jabra Ibrahim Jabra (2002). He was editor of the following journals: Al-Arabiyya (1977-82) and The Muslim World with W. Bijlefeld (1980-90), and guest-editor of Oral Tradition: Arabic Oral Traditions (1989) and Mundus Arabicus (1992).