The Trial of Henry Kissinger (Hardcover) 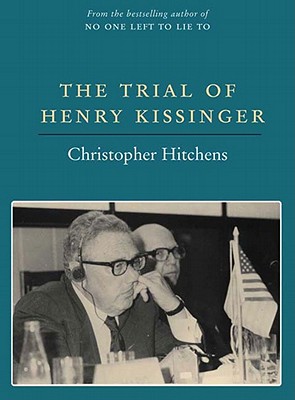 By Christopher Hitchens
$22.00
Not Currently Available to Order

“His own lonely impunity is rank; it smells to heaven. If it is allowed to persist then we shall shamefully vindicate the ancient philosopher Anacharsis, who maintained that laws were like cobwebs; strong enough to detain only the weak, and too weak to hold the strong. In the name of innumerable victims known and unknown, it is time for justice to take a hand.”

With the detention of Augusto Pinochet, and intense international pressure for the arrest of Slobodan Milosevic, the possibility of international law acting against tyrants around the world is emerging as a reality. Yet, as Christopher Hitchens demonstrates in this compact, incendiary book, the West need not look far to find suitable candidates for the dock. The United States is home to an individual whose record of war crimes bears comparison with the worst dictators of recent history. Please stand, ex-Secretary of State and National Security Advisor, Henry A. Kissinger.

Weighing the evidence with judicial care, and developing his case with scrupulous parsing of the written record, Hitchens takes the floor as prosecuting counsel. He investigates, in turn, Kissinger’s involvement in the war in Indochina, mass murder in Bangladesh, planned assassinations in Santiago, Nicosia and Washington, D.C., and genocide in East Timor. Drawing on first-hand testimony, previously unpublished documentation, and broad sweeps through material released under the Freedom of Information Act, he mounts a devastating indictment of a man whose ambition and ruthlessness have directly resulted in both individual murders and widespread, indiscriminate slaughter.

Christopher Hitchens is a contributing editor to "Vanity Fair" and the author of the best-selling "God Is Not Great." His books published by Verso include "The Trial of Henry Kissinger," "No One Left to Lie To," "The Missionary Position," "Unacknowledged Legislation," "The Parthenon Marbles," "Hostage to History," and more.

“It is shaming that Harper’s and the Guardian excerpted this book. It is so contemptible that it almost makes a case for judicial book-burning.”—Conrad Black, The Spectator

“An eloquent and devastating indictment of Henry Kissinger’s involvement in the war in Indochina, genocide in East Timor and many other acts of indiscriminate murder.”—The Village Voice

“Hitchens is a brilliant polemicist and a tireless reporter. Both sets of skills are on display throughout this book as he presents damning documentary evidence against Kissinger in case after case.”—San Francisco Chronicle

“This is a disturbing glimpse into the dark side of American power, whose consequences in remote corners of the globe are all too often ignored. Its countless victims have found an impassioned and skillful advocate in Christopher Hitchens.”—The Sunday Times [London]