Around Africa on My Bicycle (Paperback) 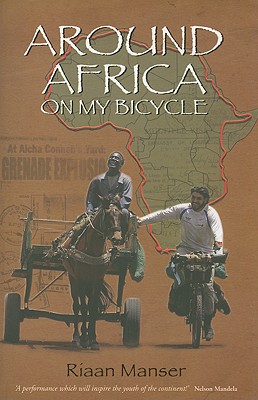 Around Africa on My Bicycle (Paperback)


This title is likely unavailable. Email or call for price and availability.
Cycling an average of 90km a day, often in extreme conditions on badly-maintained gravel and sand roads, being thrown into jail in Equatorial Guinea by aggressive and drunken border police, and facing possible death when taken hostage by drugged Liberian teenage rebels may not be a conventional idea of truly 'living', but, in September 2003, Riaan Manser rode out of Cape Town, determined to become the first person to circumnavigate Africa by bicycle. He thought it would take him a year - it took him over two. At the end of 2005, he cycled back into Cape Town, 14kg lighter and having covered 36,500 km through thirty-four countries.Intending to use his journey to generate local and international awareness of the often appalling standard of living in Africa, Riaan was also propelled by a strong desire for African adventure, a desire that was inevitably fulfilled. While Riaan's journey allowed him to experience some of the greatest generosity and kindness that he had ever encountered, often from the poorest of the poor, his adventures were also often of a more harrowing kind. In Around Africa on my Bike, Riaan allows the reader to relive the toil, excitement and occasional terror of his journey - negotiating the Sahara and Libyan deserts, learning French, Portuguese and Arabic, eating monkey, rat and bat, standing in front of the pyramids, being awarded the freedom of the Red Sea in Egypt, feeding hyenas mouth to mouth, and standing on the highest, as well as at the lowest, points in Africa. Riaan arrived safely in Cape Town on 25 November 2005.