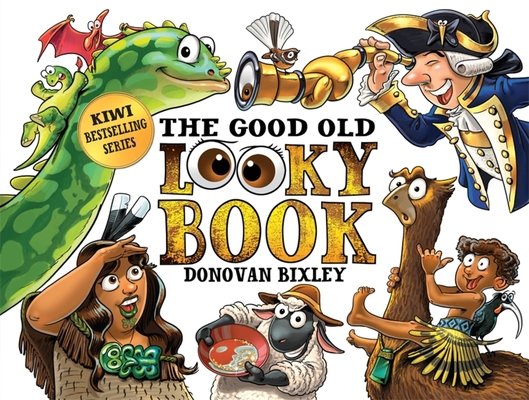 How good are your counting skills? Could you find the moa hiding from the giant eagles?
Can you help the children in the classroom find all the letters in the alphabet?

The Looky Book series continues with a hilarious 24-page puzzle book that takes a look through the history of New Zealand. Providing hours of quality fun for children aged five and up, with loads of extra details added in for adults.

'An engaging puzzle book bursting with colourful illustrations of New Zealand landscape, birds and animals in true Kiwiana style' - The Australian Women's Weekly on The Looky Book their Children's Book of the Month.

Donovan Bixley ONZM has sold hundreds of thousands of copies of his books in 31 countries and 18 languages, including te reo Maori. He has won awards for both his illustrating and writing and won the Children's Choice award in 2013. In 2021 he became an Officer of the Order of New Zealand. With over 100 books published, his unique style of illustration brings delight and joy to readers both young and old. He lives on the crater's edge of the greatest volcanic eruption in human history (also known as Lake Taupo, in New Zealand).

Music fills his spare time alongside his wife and three daughters.