Civilisation: Twenty Places on the Edge of the World (Paperback) 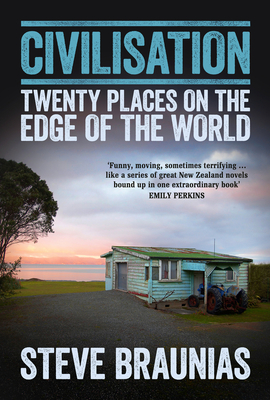 Civilisation: Twenty Places on the Edge of the World (Paperback)

In small-town, suburban New Zealand, with its seemingly average people, can be found many stories of lives, loves, aspirations, and, sporadically, a dark secret or two. As reported by a much-followed columnist and awarded journalist, these rich, fascinating, and occasionally disturbing stories of settlements follow people living throughout New Zealand, from Kawakawa in the north to Mosgiel in the south, and Samoa and Antarctica overseas. Funny, moving, and at times terrifying, this book provides a platform from which New Zealand reveals itself and proves that rarely are people and places as they first appear.

Steve Braunias is the editor-in-residence at Wintec School of Media Arts in Hamilton, a writer for many primetime TV series, and a regular panelist on TVNZ7’s The Good Word. He is the recipient of a Montana Book Award and more than 20 journalism awards as well as the author of several books, including Fish of the Week, Roosters I Have Known, and Smoking in Antarctica.

"In this funny, moving, sometimes terrifying book, our country reveals itself; people and places are never as they first appear. Full of astonishing phrases, insights, and provocations, Civilisation is like a series of great New Zealand novels bound up in one extraordinary book."  —Emily Perkins, author, The Forrests

"Steve Braunias could be a character in Chaucer’s Canterbury Tales, traipsing to places like St. Bathans and Mercer, inviting himself into homes to seek out those little nuggets. More often than not, he finds them."  —Wallace Chapman, radio and television host, Back Benches

"Steve Braunias shares with us the intimacies of people's lives, their thoughts and beliefs, the values of their communities, and so the deep meanings of places. . . . A writer the whole world would like to hear about."  —Jonathan Lorie, author, The Traveller's Handbook