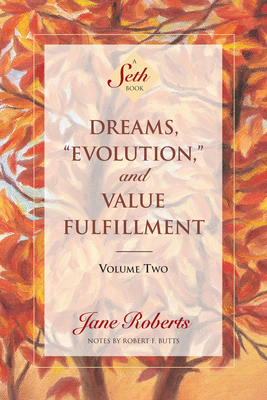 This is book number 2 in the Roberts, Jane series.

In the first volume of Dreams, “Evolution,” and Value Fulfillment, Seth presented an in-depth picture of the origin of all life — from the inner dream world to the vast display of material creation. Here, in Volume Two, Seth continues his explanation of the physical world as an ongoing self-creation — a direct and intentional outgrowth of the wisdom of the life forms that inhabit it, including humanity. He expands upon his vision of a thoroughly animate universe, where virtually every possibility not only exists, but is constantly encouraged to achieve its highest potential.

In his typical awe-inspiring manner, Seth sheds light on many controversial and complex subjects, including:

•  The ways in which our religions have stifled the human spirit
•  Surprising insight into life’s meaning and purpose
•  The genetic basis of faith, hope, and charity
•  The pursuit of pleasure as a fundamental human need
•  How each species keeps millions of characteristics within its genetic bank for various contingencies

Dreams are mental work and play combined, psychic and emotionally rich creative dramas. They also involve you in the most productive of enterprises as you begin to play with versions of events that are being considered for physical actualization . . .  — Jane Roberts, Speaking for Seth
Jane Roberts (May 8, 1929 – Sept 5, 1984) grew up in Saratoga Springs, New York where she attended Skidmore College. She was a prolific writer in a variety of genres including poetry, short stories, children’s literature and fiction when in 1963, she began to receive messages from a non-physical energy personality who called himself “Seth.” Her husband, Robert F. Butts, an artist and writer, recorded the messages and together they dedicated their lives to the publication of Seth’s teachings.

Today, the “Seth Books” are world-renowned for comprising one of the most profound bodies of work ever written on the true nature of reality. They have become classics in the fields of psychology and personal growth, and stand out as one of the major forces that led to the New Age philosophical movement in the 1970s.
Praise for The Seth Books by Jane Roberts

“The Seth books present an alternate map of reality with a new diagram of the psyche . . . useful to all explorers of consciousness.”  — Deepak Chopra, M.D., author of The Seven Spiritual Laws of Success

“Seth was one of my first metaphysical teachers. He remains a constant source of knowledge and inspiration in my life.”  — Marianne Williamson, author of A Return to Love

“I would like to see the Seth books as required reading for anyone on their spiritual pathway. The amazing in-depth information in the Seth books is as relevant today as it was in the early ’70s when Jane Roberts first channeled this material.”  — Louise Hay, author of You Can Heal Your Life

“The Seth books were of great benefit to me on my spiritual journey and helped me to see another way of looking at the world.”  — Gerald G. Jampolsky, author of Love Is Letting Go of Fear

“As you read Seth’s words, you will gain more than just new ideas. Seth’s energy comes through every page — energy that expands your consciousness and changes your thoughts about the nature of reality.” — Sanaya Roman, author of Living with Joy

“To my great surprise — and slight annoyance — I found that Seth eloquently and lucidly articulated a view of reality that I had arrived at only after great effort and an extensive study of both paranormal phenomena and quantum physics....”  — Michael Talbot, author of The Holographic Universe