Song of Arirang: The Story of a Korean Rebel Revolutionary in China (Hardcover) 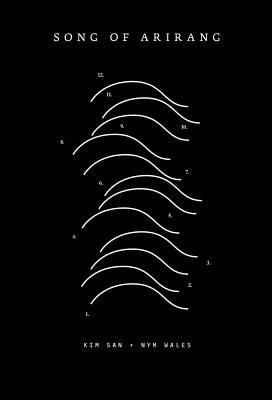 Song of Arirang: The Story of a Korean Rebel Revolutionary in China (Hardcover)

First published in 1941 and long unavailable, Song of Arirang tells the true story of Korean revolutionary Kim San (Jang Jirak), who left colonized Korea as a teenager to fight against Japanese imperialism and fought alongside Mao's Red Army during the Chinese Revolution. This remarkably intimate memoir (as told to the American journalist Nym Wales, aka Helen Foster Snow) brings to vivid life some of the most dramatic events of the period.

With its first-hand account of early 20th-century guerilla insurgency and radical cross-pollination, this rare, behind-the-scenes look into what Wales describes as the psyche of a dedicated and thoughtful revolutionary gives voice to the brutality, betrayal and alliances that rocked East Asia at the beginning of the last century and continue to shape the region--and the world--today. Kaya's edition of Song of Arirang includes the writings (both literary and in essay form) of Kim San himself, translated into English for the first time ever, as well as contextualizing notes by George Totten and an introduction by Arif Dirlik.

Kim San (Jang Jirak, 1905-37) left his family in Korea as a teenager and crossed the border into China, where he joined Mao's Red Army. A participant in or witness to some of the most critical events of the Chinese Revolution, he became a leader in the fight against Japanese colonial rule, and was executed in China in 1937. He was awarded a posthumous Patriot award by the South Korean government in 2005.

Born in Cedar City, Utah, Helen Foster Snow (1907-97) moved to China in 1931 and reported extensively on the Chinese Revolution, the Korean independence movement and the Sino-Japanese War. Writing under the pseudonym of Nym Wales, she wrote and published over 40 books, including Inside Red China, My China Years: A Memoir and Song of Ariran. In 1993, she was awarded the first China Writer's Association award, and in 1996, she became the first American ever to be honored as a Friendship Ambassador by the Chinese government.