Study of the Raft (Colorado Prize for Poetry) (Paperback) 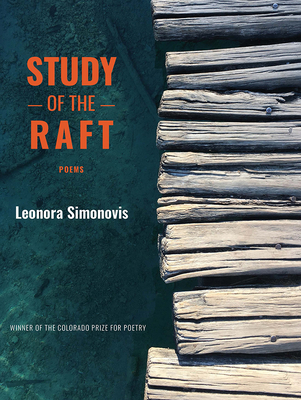 Study of the Raft (Colorado Prize for Poetry) (Paperback)


This title is likely unavailable. Email or call for price and availability.
Winner of the 2021 Colorado Prize for Poetry
In Study of the Raft, Leonora Simonovis’s poems weave the outer world of a failed political revolution in her native country, Venezuela, with an inner journey into the memories of migration and exile, of a home long gone, and of family relations, especially among womxn. The collection explores the consequences of colonization, starting with “Maps,” a poem that speaks of loss and uprootedness, recalling a time when indigenous lands were stolen and occupied, where stories were lost as new languages and beliefs were imposed on people. The politics of the present are also the politics of the past, not just in the Venezuelan context, but in many other Latin American and Caribbean countries. It is the reality of all indigenous people. Simonovis’s poems question the capacity of language to represent the complexity of lived experience, especially when it involves living from more than one language and culture. These poems wrestle with questions of life and death, of what remains after what and whom we know are no longer with us, and how we, as humans, constantly change and adjust in the face of uncertainty.

Leonora Simonovis is a bilingual poet who grew up near Caracas, Venezuela, and currently lives in San Diego, California, where she teaches Latin American literature and creative writing at the University of San Diego. She is a VONA (Voices of Our Nations Arts Foundation) fellow, has an MFA from Antioch University, Los Angeles, and is a contributing editor for Drizzle Review. Her work has appeared or is forthcoming from Gargoyle Magazine, Diode Poetry Journal, The Rumpus, Arkansas International, Inverted Syntax, and Tinderbox Poetry Journal, among others.
“I can’t remember a debut collection so startling and fresh, so uncompromising and passionate. Leonora Simonovis’s powerful, confident voice runs through each and every one of these poems like a lifeline in defiance of injustice and oppression. She writes about Venezuela, exile, and family with such rich detail and nuance that we are swept away into her struggle to maintain a precarious balance in all of her worlds. This book is a sharp reminder that the personal is also—and always—political. She is always tuned in to the heart, a heart we can believe in and trust.”
—Jim Daniels

“In Leonora Simonovis's beautiful book, Study of the Raft, family history is mixed with feminist history, and what it means to be a citizen. The death of Abuela's child intersects with what it means to be a woman, dodging "the bullets of others' desire," and the speaker's sense of alienation in her own country. All of these tensions accumulate into an important geometry of American life. Simonovis's poems are plainspoken and powerful, gentle and fierce. An impressive debut, these poems are a gift to contemporary American poetry.”
—Victoria Chang