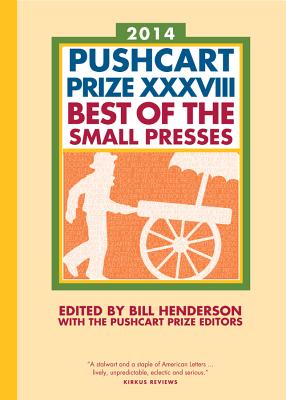 This is book number 38 in the The Pushcart Prize Anthologies series.

“A stalwart and staple of American letters.” Kirkus Reviews

Winner of honors from the National Book Critics Circle, Publishers Weekly, Poets & Writers / Barnes & Noble and others, and acclaimed by readers and reviewers internationally, The Pushcart Prize series continues to be a testament to the flourishing of American fiction, essays, memoirs and poetry in our small, independent presses. As commercial publishers consolidate into a few profit-driven conglomerates, small presses encourage literature that is lasting, important and exciting.Edited with the assistance of over 200 distinguished Contributing Editors – including Guest Poetry Editors Patricia Smith and Arthur Sze – this volume includes over 60 fascinating works selected from thousands of nominations and hundreds of presses, a complete roster of today’s outstanding non-commercial publishers.As David Ulin, Los Angeles Times Book Critic commented on last year’s Pushcart Prize: “I’ve had a love of these anthologies for many years – for their diversity, their range of expression and also for their commitment to writing and publishing.”

More than 200 Contributing Editors and CO-Editors help select the annual volumes of The Pushcart Prize. The Pushcart Prize Editors come from almost every state in the USA and around the world. Every year more than 8,000 nominations are received for the Pushcart Prize.
With large publishing houses facing an uncertain future, the Pushcart Prize is more valuable than ever in highlighting the unique voices thriving in America’s small presses.
— Publishers Weekly