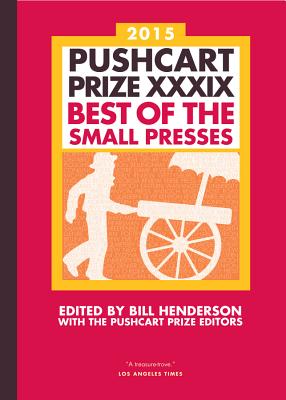 This is book number 39 in the The Pushcart Prize Anthologies series.

”Like discovering yet one more galaxy.” - World Literature Today

Publishers Weekly in its boxed and starred review of last year’s edition of this annual anthology commented “With large publishing houses facing an uncertain future, the Pushcart Prize is more valuable than ever in highlighting the unique voices thriving in America’s small presses.”As David Ulin, Los Angeles Times book critic recently commented on the series: “I’ve had a love of these anthologies for many years – for their diversity, their range of expression and also for their commitment to writing and publishing.”Edited with the assistance of over 200 distinguished Contributing Editors – including Guest Poetry Editors Eduardo Corral and Claudia Rankine – this volume was selected from over 8000 nominations of stories, essays and poetry sent in by hundreds of presses, a complete roster of today’s outstanding non-commercial publishers. The Pushcart Prize has been honored by the National Book Critics Circle, Publishers Weekly, Poets & Writers / Barnes & Noble and others, and acclaimed by readers and reviewers internationally.