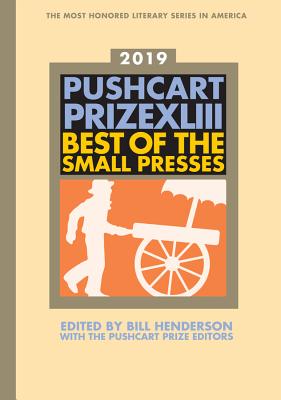 This is book number 43 in the The Pushcart Prize Anthologies series.

“More good poems, essays and stories are found in these presses than any other place on the planet.” Richard Ford

This 43rd edition of the annual Pushcart Prize – the most celebrated literary series in America – is further proof that these days the heat and heart of contemporary writing is often found in small presses scattered around the country and the world, far from the pressures of commercial centers. As the variety of selections in PUSHCARTPRIZE XLIII indicates, it is a diverse community constantly infused by new stories, essays and poetry from small press authors with a vision of what is honest and vital. Over 70 authors are included from more than 50 presses.Winner of the Ivan Sandrof Lifetime Achievement award from the National Book Critics Circle, the Poets & Writers/Barnes & Nobel Writers For Writers recognition, and named with Pushcart Press as one of the most influential publications in the development of America publishing over the past century by Publishers Weekly, the Pushcart Prize presents over 600 pages of literary brilliance from both new and established authors.