No Rooms of Their Own: Women Writers of Early California, 1849a 1869 (Paperback) 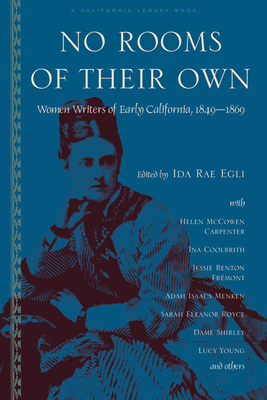 In the wild, isolated Western frontier, where laws, traditions, and living conditions were like nowhere else in America, it was a bold act for a woman to write and to seek publication. Dame Shirley, Ina Coolbrith, and Mary Hallock Foote never achieved the fame and success of Mark Twain or Bret Harte, but they were celebrated writers in their time. They, too, wrote about California during the gold rush, but with a perspective all their own. Their writings, as well as the poetry, fiction, essays, memoirs, and diary entries of other women writers of their era, are collected in No Rooms of Their Own. First published by Heyday in 1992 and now reissued under our California Legacy series, No Rooms of Their Own has become a standard reference and a starting point for many studies. More importantly, No Rooms of Their Own remains one of the few anthologies in which the scope and range of authentic literary voices of the women of the gold rush era can be heard. This collection--now repackaged for a contemporary audience--pays homage to the talent and experiences of these women who built the West.