Qarajeh to Quba: Rugs and Flatweaves from East Azarbayjan and the Transcaucasus (Hardcover) 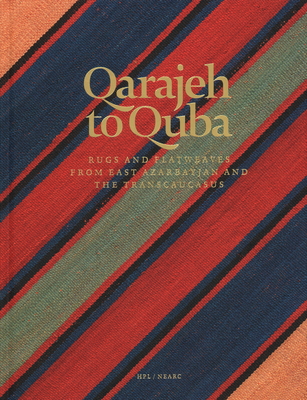 Qarajeh to Quba: Rugs and Flatweaves from East Azarbayjan and the Transcaucasus (Hardcover)


This title is likely unavailable. Email or call for price and availability.
- Contains many previously unseen and unpublished pieces from a highly regarded collection- Book design by a top UK graphic designer, Misha Anikst, with photographs by the USA's leading specialist carpet/textile photographer, Don TuttleThis book features the collector/author's well informed views about a careful selection of mainly 19th century knotted pile carpets and flatwoven covers in various techniques from his own extensive collection, which has been built up over a period of more than five decades. Many of the rugs, which are all of the highest graphic and artistic quality, have been acquired without recourse to the open market and are therefore previously unseen and unpublished. Raoul (Mike) Tschebull's long experience in the genre allows insights that go beyond the conventional wisdom of the traditional antique oriental carpet bazaar. His collecting career began under the aegis of one of the great US collectors of a previous generation, Joseph V. McMullan. This beautifully illustrated book will include a general introduction to the region, which straddles the present-day border between north-western Iran and the Republic of Azerbaijan, setting the context for the focused presentation of some 70 examples, each with the author's comments about design, structure, technique and attribution, providing a matrix within which dating can be considered. In-country field experience colors some of his views, and extracts from his field notes and accompanying images will be included the book.
Born ten miles west of Manhattan, Raoul ('Mike') Tschebull grew up with his family's unusual old oriental rugs, puzzled over them, had trouble figuring out where and when they were woven. It produced a lifelong interest. As a result, he has been a long-term collector of rugs and related textiles along with his late wife, Ingeborg. After graduating from Colby College in Waterville, Maine, in 1963, for most of his working career he was employed in international banking, substantially in Germany and Spain. He has an extensive record of writing in the field of Eurasian ethnographic textiles, including pile-woven rugs, but is best known for the iconic Finch College Museum of Art exhibition catalogue Kazak (1971). Rug study has brought him into extensive contact with cultural anthropology, as well as a myriad of other disciplines, and has afforded him opportunities to speak on the subject of Eurasian weaving in diverse conferences and symposia from San Francisco to Tehran. An early recipient of the Near Eastern Art Research Center's Joseph V. McMullan Award for scholarship and stewardship in the field of Islamic carpets, he is on the board of directors of the NEARC, which fosters research and publication in the field.