Writings and Writing: Investigations in Islamic Text and Script in honour of Januarius Justus Witkam (Hardcover) 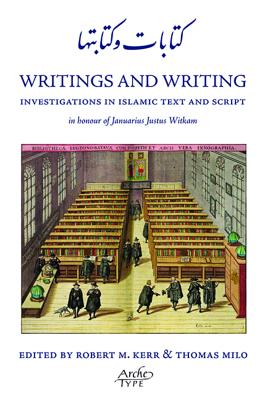 Writings and Writing: Investigations in Islamic Text and Script in honour of Januarius Justus Witkam (Hardcover)


This title is likely unavailable. Email or call for price and availability.
Presenting a state-of-the-art overview of the diverse and dynamic field of Islamic manuscript studies, the purpose of this volume is to look at what has been achieved and what has yet to be done, on the occasion of the retirement of Professor J.J. Witkam from the Chair of Codicology and Palaeography of the Islamic World at Leyden University. The 20 articles contained in this volume were specially prepared by leading international scholars in their respective fields. Included are studies of specific texts of various genres, manuscript traditions, writing and scribal practice, writing materials, libraries and collections as well as cataloguing initiatives past and present. Taken together, they form a concise compendium which shows the importance of the often-neglected study of primary sources and their traditions. As such the book is both a necessary and welcome addition to the library of any serious scholar or student working in the fields of Oriental and Islamic studies.
00165375iis3143914.0Normal0falsefalsefalseEN-GBJAX-NONE Robert M. Kerr read Ancient Near Eastern Studies at Tübingen and Leyden. Much of his recent work has been on Semitic epigraphy, especially Punic in Roman North Africa. Recently he published the first scientific edition of late Punic texts in Latin script (Latino-Punic Epigraphy. A DescriptiveStudy of the Inscriptions, Tübingen, 2010). He is Assistant Professor of Near Eastern Studies at Wilfrid Laurier University in Waterloo Ontario. Thomas Milo is an independent scholar working on computer models of pre-typographic Arabic script structures for his company DecoType. His latest publication is 'Arabic Amphibious Characters: phonetics, phonology, orthography, calligraphy and typography' (in: Vom Koran zum Islam, eds. M. Gross & K-H. Ohlig, 2008). He is an associate member of the Unicode Consortium, to which he has contributed since 1989.