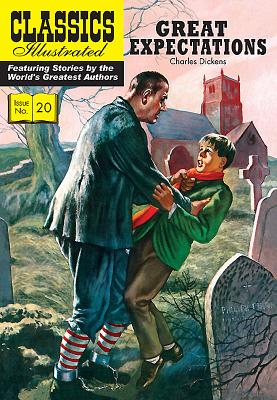 This is book number 20 in the Classics Illustrated series.

Pip, a young orphan living in the care of his older sister and her kind husband, is called upon in his youth under strange circumstances by the mysterious Miss Havisham to entertain her. After carrying out an apprenticeship in his brother-in-law's Blacksmiths, he receives an offer of support from an unexpected character from his past... Classics Illustrated tells this wonderful tale in colorful comic strip form, offering an excellent introduction for younger readers. This edition also includes theme discussions and study questions, which can be used both in the classroom or at home to further engage the reader in the story. The Classics Illustrated comic book series began life in 1941 with its first issue, Alexandre Dumas' "The Three Musketeers," and has since included over 200 classic tales released around the world. This new edition is specifically tailored to engage and educate young readers with some of the greatest works ever written, while still thrilling older readers who have loving memories of this series of old. Each book contains dedicated theme discussions and study questions to further develop the reader's understanding and enjoyment of the work at hand.
Hilary Burningham is a former teacher and the author of the Graphic Shakespeare series. Chris Rowlatt is an illustrator and artist.