A New Battlefield: The Royal Ulster Rifles in Korea, 1950-51 (Paperback) 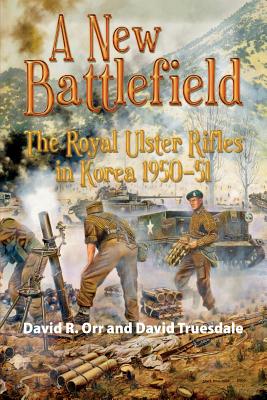 A New Battlefield: The Royal Ulster Rifles in Korea, 1950-51 (Paperback)


This title is likely unavailable. Email or call for price and availability.
Since the publication of The Rifles Are There in 2005, which dealt with the 1st and 2nd Battalions Royal Ulster Rifles in the Second World War, it was felt by many that a follow up volume dealing with the Korean conflict was overdue. A limited yet competent history had been produced in 1953 by the then Adjutant Captain Hugh Hamill, although this has been long out of print. A New Battlefield follows the Battalion as it prepares for the first major conflict fought by Britain since the defeat of the Japanese in 1945. During the summer of 1950, the Battalion was stationed at Sobraon Barracks in Colchester and was in the process of being issued with desert kit for a tour of duty at Khartoum in the Sudan and its numbers were just under four hundred men. For service in Korea, these numbers had to be drastically increased and drafts of volunteers and reservists were brought in from various sources. Consequently this 'Irish' Battalion contained men from the Lancastrian Brigade, Welsh Brigade, Mercian Brigade, the Light Infantry and other Battalions of the Irish Brigade, The Irish Brigade also reinforced other regiments, the Royal Inniskilling Fusiliers sending two officers and fifty 'other ranks' to the King's (Liverpool) Regiment. Despite their varied backgrounds, all ranks soon coalesced into a professional unit that took the campaign in its stride. From winter temperatures that dropped well below 40f to a summer heat that rose to 105f with a humidity to match these men survived all and dealt with a brave and tenacious enemy. The Battalion sailed for Korea in October 1950 and fought its first major action in January 1951 at Chaegunghyon, or as it was known to the Rifles, 'Happy Valley'. Here, for the first time they faced an enemy that often literally fought to the death, despite overwhelming firepower, bombing and widespread use of napalm. Three months later, on the banks of the Imjin River, the Rifles, in conjunction with the remainder of 29 Brigade, faced an army that came in such numbers that running out of ammunition before the enemy ran out of men became a reality. While the Battle of the Imjin is today largely remembered for the last stand fought by the 'Glorious Glosters', research reveals that it was the Royal Ulster Rifles that held open the door that allowed the survivors of 29 Brigade to escape annihilation. The media reacts with horror at the loss of life in Afghanistan when it is in single figures, yet during the fighting at 'Happy Valley' the Battalion lost 157 men in one twenty four period. In the 1950's with limited television and press coverage Korea was quite literally on the far side of the world and generated little interest with the population; it remains so to this day. With the current situation in that country its past deserves to be re-examined and reassessed. Besides numerous photographs there are also appendices including Honors and Awards, Operation 'Spitfire', an Order of Battle for 29 Brigade, and a Nominal Roll, which includes casualties.